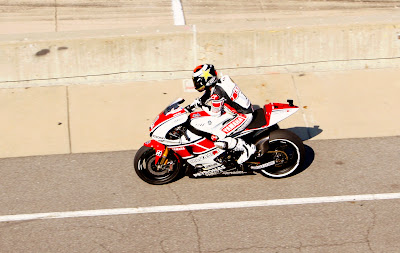 Defending MotoGP World Champion Jorge Lorenzo rolls down the pitlane on his #1 Team Yamaha Factory YZF-M1 during the free practice 3 session at the 4th Annual RedBull Indianapolis MotoGP.  The defending champ is guaranteed a runner-up finish to the 2011 MotoGP World Championship even though he is not scheduled to race at the season-finale at the Valencia circuit starting tomorrow.  The champ lost parts of his fingers during a crash at the Phillip Island round three weeks ago and will be forced to miss the season's 17th and final round.

In what was a great season of MotoGP racing, with the swan song being sung for the '800' machines as MotoGP ushers in the '1000'-era for 2012 and beyond, the riders, teams and fans and sponsors alike are all still numb from the loss of former 250GP World Champion Marco Simoncelli during the previous round's second lap crash at Malaysia, where Super Sic was tragically killed in a racing accident in the premier final.  The event was canceled as a result of his death.

You can follow all the action this weekend at the Valencia, Spain circuit below thanks to MotoGP.com and MotoMatters.com.

Julian Ryder has this spin on the heavy hearts at the season-ending Valencia round, thanks to SuperBikePlanet.com: