AMA Flat Track: Chris Carr Tribute Video From The Fans In The Stands at Flat Track.com 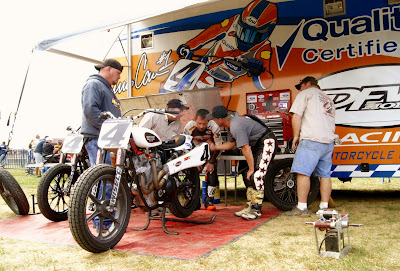 In a scene that could be interpreted as a prophetic gathering of the top finishers at the end of the day, Springfield Mile II winner Willie McCoy consults with former team mate and 7-Time AMA Grand National Champion Chris Carr and his long-time tuner, Kenny Tolbert during a break in the on-track action at the Illinois State Fairgrounds on September 4.  Round 16 of the 2011 AMA Pro Flat Track Harley-Davidson Insurance Grand National Championship Series would see the two finish 1-2 in the National main event, with McCoy edging the #4 American Motorcyclist Assoc/Classic H-D/DFW Honda/Arai-sponsored XR750 rider by just .012 seconds on his #59 H-D of Wausau XR.

Having been long-time friends since McCoy joined the circuit in the late '80s, the few Nationals that Willie still does attend, he is usually seen pitted very close to the Carr/Tolbert pairing.  And as the scene in the shot above shows, spends time with The Masters of the Mile before, during and after each event and takes in everything he hears and sees.  Carr and Tolbert were two of the first people to greet McCoy at the podium after his break-out win on the Springfield Mile oval over Labor Day weekend, and other than McCoy no one looked happier to see it happen.  It has been said that KT taught McCoy everything he could and/or knew about how to build an XR, and McCoy builds all of his equipment, which in itself is as or as-close-to-as sanitary and fast as Carr's mounts.  This day it was 'just this much' faster than the former Grand National Champ's, and he grabbed his first Grand National win in 23 years of trying.

Polished and professional, Carr and Tolbert have made an impression on the series and the sport that will be forever lasting, and with plans to keep moving forward with a young up-and-coming rider, should keep doing so, albeit with Carr no longer in the saddle.  Nonetheless, the level of support in terms of the sport, fans and sponsors and what the duo has done in terms of overall wins and championships is something that will continue to help AMA Pro Flat Track grow forward in the months and years to come.  And we will also get to keep seeing a couple of neat and fun guys around the series for some time to come.

Chris Carr's 2011 Farewell to Flat Track Tour is now behind us, as the now-retired #4 wrapped up the season at Pomona last month with a 7th place finish, and a 5th place finish in the final standings of the 2011 AMA Pro Flat Track Harley-Davidson Insurance Grand National Championship Series.  After competing in 20 AMA Grand National events and 15 other AMA or 'outlaw' events during the 2011 season, The Prince of Peoria has called it a day and the fans of the sport are definitely sadder for it, but relish what the future holds.

Mia Moore and Chew Larcom from Flat Track.com put together a nostalgic look back at the former champ, as we salute the moving on of one of the all-time greats of the AMA Grand National Championship Series.

A big thanks to Chew and Mia, The Fans In The Stands from FlatTrack.com for putting together this very fitting tribute to recently retired 7-Time AMA Grand National Champion Chris Carr: