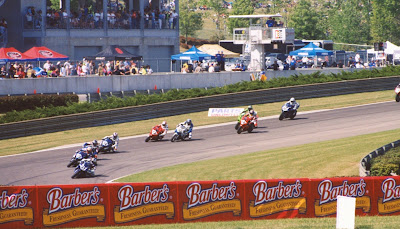 DAYTONA BEACH, Fla. (November 7, 2011) - AMA Pro Racing announced today that Barber Motorsports Park will once again play host to the stars of AMA Pro Road Racing, becoming the seventh track to renew for the 2012 season. The event, scheduled for June 22 - 24, 2012, will mark the tenth consecutive year that the series will visit the picturesque 2.38-mile natural road course in Birmingham, Ala. since the facility opened in 2003.
Last year's Barber SuperBike Classic proved to be a pivotal and exciting event for the 2011 championships. M4 Suzuki's Martin Cardenas scored his breakout AMA Pro National Guard SuperBike victory on Saturday while Rockstar Makita Suzuki's Blake Young narrowed eventual 2011 SuperBike Champion Josh Hayes' points lead with a Sunday win.
Just like in 2011, fans will witness thrilling doubleheader action in AMA Pro National Guard SuperBike, AMA Pro Daytona SportBike and AMA Pro Motorcycle-Superstore.com SuperSport, while the AMA Pro Vance & Hines XR1200 Series will battle it out in a single race format.
In October, AMA Pro Racing announced six contract renewals for the 2012 AMA Pro Road Racing season. With the addition of the event at Barber Motorsports Park, the partial schedule is as follows:

AMA Pro Racing is currently working with additional tracks to finalize the 2012 AMA Pro Road Racing schedule. Details about those events, including events which AMA Pro Racing will be conducting in conjunction with promotion by M1 Powersports, will be announced as soon as they are available.