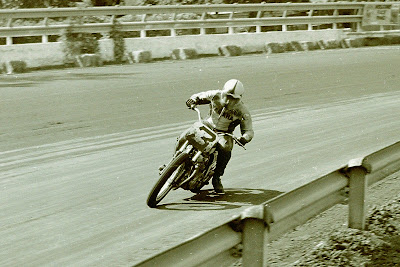 Former Triumph and Yamaha factory pilot Gene Romero is seen coming out of turn 4 at the Syracuse Mile during a qualifying session in September 1975 at round 16 of the AMA Grand National Championship Camel Pro Series held at the New York State Fairgrounds.  Romero was competing on his #3 C&J Frames-sponsored Yamaha in his first season as a privateer after having ridden for the Yamaha factory team in '73-'74.  Earlier in the season, Romero won the Daytona 200 while riding for the Yamaha factory team in the road racing part of the schedule, where he still had full factory support at the time.

Romero competed in the AMA Grand National Championship for 16 years, finishing in the top-10 in points regularly from the '68 season well into the late '70s, while winning the 1970 AMA Grand National Championship as a member of the Triumph factory team.  Although his biggest win came in the '75 Daytona 200, won of his biggest wins from this old fan's standpoint was his Indy Mile win in August '74 aboard the Yamaha parallel XS650-based twin, which if memory serves me correctly, was the last win on a mile track for the XS-based mount. 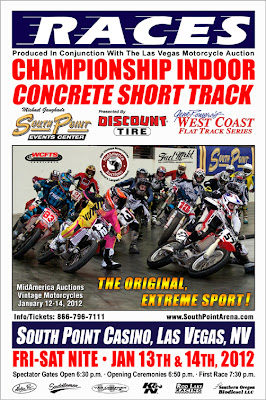 You can check out Gene Romero's West Coast Flat Track Series here via their official site:

And you can read more about '70 AMA Grand National Champion Gene Romero here via the AMA Hall of Fame site: