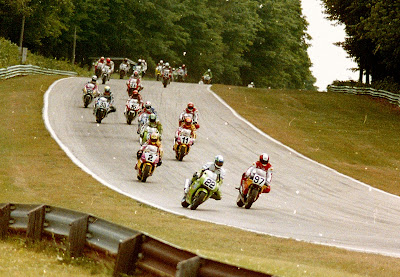 Riders come down the Moraine Sweep and set-up for turn 5 at Road America during the sighting lap for the AMA Superbike Championship Series in June 1991.  In this shot you can really tell the way the riders have to set-up and brake after hitting speeds of over 160 mph in order to be ready for the first gear left-hand turn at the four-mile track located just outside of Elkhart Lake, WI., and the drop-off of elevation mentioned in LL's story is evident from this angle.

The Coca-Cola Super Cycle Classic held at Road America had at the time been (and still is) an annual stop on the AMA Superbike Championship Series calendar since the 1980 season.  In it's first few years on the schedule, the events were held in mid-late May, which if you know how the weather can be in south central Wisconsin that time of year, can be dicey.  The powers that be then moved the event further back on the calendar to mid-late June, the '91 event actually taking place over June 28-30.  The partial 2012 schedule just released last month has the event scheduled for June 1-3.

Leading the group in this shot are Scott Russell on the #22 Muzzy Kawasaki/Dunlop/SBS/NGK-sponsored ZX-7R alongside Miguel Duhamel on the #97 Honda Commonwealth/American Honda/Honda Oils & Products/Dunlop-backed RC30.  Following just behind is Jamie James on the #2 Vance & Hines/Yamaha/Dunlop/Bell-sponsored YZF750OW01.  Russell would go on to win the '92 AMA Superbike Championship and the '93 WSBK Championship, while Duhamel would win the '95 AMA Superbike Championship and a handful of AMA 600 Supersport and FX Championships throughout his career.  These two men alone have five-each Daytona 200 victories on thier resumes over the years.

James would go on to win the race by .880 seconds over team mate Thomas Stevens (behind James) on the #11 like-sponsored V&H OW, but Stevens would win the war at the end of the season by winning the '91 AMA Superbike Championship.  James had won the '89 AMA Superbike Championship over then-team mate Russell while riding for the Yoshimura Suzuki team.  Eventual 4th place finisher Jacques Guenette on the #39 Kawasaki USA/Dunlop/Muzzy R&D/NGK-sponsored ZX-7R is directly behind James.

Freddie Spencer on the #19 Two Brothers Racing/American Honda/HP-4 Oil/Hondaline-sponsored RC30 is just behind Guenette, with eventual 3rd place finisher Rich Arnaiz on the #20 Commonwealth Racing/American Honda/HRC/Hondaline-backed RC30.  Although Spencer would never win the AMA Superbike Championship, he did win the '83 and '85 500CC World GP Championship, as well as the '85 250CC GP World Championship.  Spencer, Russell and Duhamel would all DNF on the day.

Tommy Lynch on the #30 Suzuki/Yoshimura/AGV/Michelin-sponsored GSX-R750 is next coming into turn 5, with Tom Kipp on the #16 Wiseco/Bell/Klotz/Bridgestone-backed Yamaha.  Kipp would finish 7th on the day with Lynch in 8th place.

Long before he was covering AMA Pro Flat Track events and penning his great column 'Archives' for www.CycleNews.com, and putting his own stash of great stuff out on the web from over the years on his bitchin' website, www.TheRiderFiles.com, Larry Lawrence was THE man in charge for all-things AMA Pro Road Racing in terms of the media coverage.  Traversing the continent in search of the perfect shot and story, LL led the AMA's charge to put road racing out to the masses by setting up interviews and local news coverage of AMA Pro Road Racing events across the nation, working with local news outlets and the riders of the day to get the coverage out to the general public.

Also working with the AMA out of their Ohio offices, LL wrote and maintained biographies for the Hall of Fame, covered WERA events for CN and the former American Roadracing Magazine, and eventually became what is today a virtual walking/talking historian of the sport.  Make no mistake, this man knows his history, and not just in racing, either.

Besides trying to do a stellar job of blowing smoke up the skirt of one of the nice guys in the sport (and a true and great friend of Stu's Shots), I enjoy getting to read his takes on whatever it is he may be writing (or shooting) about around the sport.  And due to our similar ages, related friends and upbringing in the great city of Indy, most everything is of interest to me especially if penned by one Mr. Lawrence.

So I get especially giddy when he puts out a great story (like any of them aren't?!) about the history of the sport that involves a track or place that I hold near and dear, like an old, long-lost friend.

This week's 'Archives' column hit a home run (again!) with LL's history of turn five at Road America, and what significance and history it holds in the great sport of AMA Pro Road Racing and the AMA Superbike Championship.

So sit back, strap in and hang on as Cycle News' own Larry Lawrence digs into the 'Archives' to talk about one of the most daunting turns in AMA Road Racing's great history: