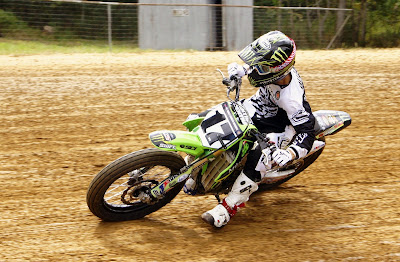 Henry Wiles spins it up on the #17 Monster Energy Kawasaki/Jones Bros/Don's Kawasaki/Arai-sponsored KX450F and sets fast time in his return to the track he has owned since the 2004 season during qualifying for the Peoria TT on August 21.  Round 14 of the 2011 AMA Pro Flat Track Harley-Davidson Insurance Grand National Championship Series saw the reigning 2-Time Singles Series Champion return to win his 7th National main event in a row, after suffering injuries earlier in the year at the DuQuoin indoor round that would see him have to sit out almost a third of the season.

Adding to his roster of wins this season, Hammerin' Hank also managed to pull off the win at the Salinas Short Track round in late April, before going under the knife in California to have his knee repaired from the damages incurred the previous weekend inside the confines of the Southern Illinois Center on the DuQuoin State Fairgrounds.  Wiles was able to speed up his rehab, and returned to the track less than three months later at the Lake Odessa, MI. round, and was able to wrestle his GCR XR home to a safe 12th place finish.

Skipping the Sacramento round in late July, Wiles was able to card a strong 4th place finish at the Castle Rock TT before heading to the track that he has owned in central Illinois.  When the series next hit the Springfield Short Track over Labor Day weekend, he again did the near-impossible by winning his 5th National main in a row on the rodeo/multipurpose arena track located at the Illinois State Fairgrounds, further adding to his legend as a Grand National Championship Series contender.

Although Henry wasn't able to defend his two Single Series Championships due to missing part of the year, he still finished the season in the top 10 in points, 10th overall.  Not bad for a guy who didn't even make it to six rounds and missed qualifying for another two rounds.

Look for The Hammer to be back strong as ever for the 2012 season and completely healed up.  By the time Daytona rolls around in mid-March, Wiles will be ready to go again! 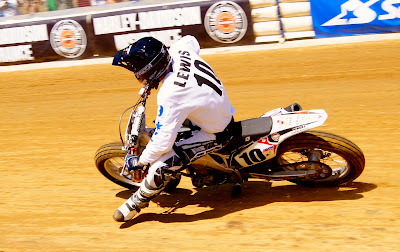 Former AMA Supermoto Champion Johnny Lewis maneuvers through turn 2 at the Peoria TT during his heat race at round 14 of the 2011 AMA Pro Flat Track Harley-Davidson Insurance Grand National Championship Series.  The #10 Scott Powersports/Dubach Racing Developments/Saddlemen/Triple J Racing-sponsored and Honda CRF450R-mounted JL10 would go on to finish 3rd in his heat behind winner Henry Wiles and runner-up Rob Pearson, and would end the day in the 10th spot in the National main event at the oldest track on the AMA Pro Flat Track Series schedule.

Lewis turned even more heads during the 2011 season on the Scott-developed Kawasaki 650R-based Twins Series mount, in carding a 2nd place finish at Hagerstown (for a series' and personal best finish in the Twins class) and for leading several laps at the Springfield Mile II round over Labor Day weekend.  He also brought home two 2nd place finishes on the year at the season-opening rounds in Daytona.

Johnny ended the season ranked as the 7th place rider in the overall standings, even after not
qualifying for three rounds on the year (Salinas ST, Sacramento, Springfield ST.)  After improving from a 10th place finish in the 2010 season, look for JL10 to move up during the 2012 year. 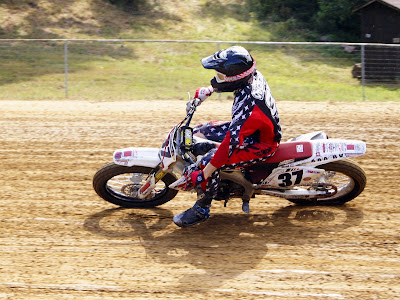 Jimmy Wood puts his #37 A&J/Southland Racing/M.E.H. Corp/Race Tech-sponsored Honda CRF450R through it's paces during qualifying for round 14 of the 2011 AMA Pro Flat Track Harley-Davidson Insurance Grand National Championship Series at the Peoria TT on August 21.  Qualifying in the 27th spot for the National main, the West Coast hotshoe was involved in a massive pile-up in turn one of heat 3 that saw him suffer extensive damage to his left wrist, causing him to miss several rounds of the series.

With a new Twins Series program to work with for the 2011 season on his A&J Racing Kawasaki 650R-based mount, Wood was able to still finish the season ranked as the 13th overall rider for the year.  His season-best effort came at the Salinas Short Track early in the season where he finished 2nd behind winner Henry Wiles.

For a man who didn't even have his full effort for the year planned out until late winter, Wood did a remarkable job for the year, and plans to contend the full season for the second year in a row during the upcoming 2012 race season.  We wish him the very best of luck!