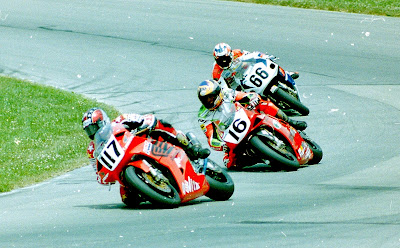 Eric Bostrom on the #117 American Honda/Dunlop/DID/Arai-sponsored RC45 leads Tom Kipp on the #16 Fast By Ferracci/DKNY MEN/Ducati Motorcycles/AGIP Lubricants-backed 998, with Mat Mladin on the #66 American Suzuki/Yoshimura USA/Dunlop/American Showa-sponsored GSX-R750 close on their heels during the early running of the Wiseco Superbike 100 final at the Mid Ohio Sports Car Course in July '98.  Bostrom was appearing as a fill-in rider for the injured Miguel Duhamel for several rounds in the '98 season and would come to grips quickly with the powerful V-4 Honda in what would be a big jump for his career in the AMA Superbike Championship Series at the Honda Super Cycle Weekend presented by Dunlop Tire event at the Lexington, OH. facility.  Mladin would also go on to win his first of seven and record breaking AMA Superbike Championships the next season.


With the rules and regulations of racing changing dramatically in the last few years, largely due to the economy, spec fuel and tires top the lists of trying to even the playing field for all contestants.  Sunoco fuels, having been involved as NASCAR's official fuel since the demise of the Union 76 contracts several years ago, has also been the fuel of choice for AMA Pro Road Racing for the last three seasons.

With the newly announced contract extension and expansion to AMA Pro Flat Track, look for the blue, yellow and red arrow to make it's presence even more well known in the future of AMA Pro Racing with it's partnerships with the DMG-led series.

Since the 2009 season, Sunoco has fueled the outstanding competition found at AMA Pro Road Racing events with Sunoco 260 GTX, a premium unleaded racing fuel designed to meet the performance needs of AMA Pro Road Racing in addition to having numerous other high performance racing applications. Each division of AMA Pro Road Racing, which includes AMA Pro National Guard SuperBike, AMA Pro Daytona SportBike, AMA Pro Motorcycle-Superstore.com SuperSport and the AMA Pro Vance & Hines XR1200 Series, has thrilled audiences across the country with neck-and-neck racing followed by photo finishes thanks in large part to the exceptional performance, quality and consistency of Sunoco 260 GTX.
As part of the new agreement, Sunoco will begin supplying AMA Pro Flat Track with Sunoco Supreme, a uniform Sunoco gasoline tailored specifically to the unique performance characteristics of the motorcycles raced in the AMA Pro Grand National Championship and Pro Singles divisions.
"Sunoco has been an important and highly-valued partner to our Series, teams and riders for the last three years," said David Atlas, Chief Operating Officer of AMA Pro Racing. "The quality of racing that we have been experiencing in AMA Pro Road Racing is unparalleled and there is no question that part of that is due to the high quality product provided by Sunoco. We are excited to welcome them to the AMA Pro Flat Track paddock."

"Sunoco's Race Fuels and Branded Marketing Departments have been extremely pleased with the partnership that has been forged over the past three years with AMA Pro Racing and their Road Racing Series," said Rob Marro, Sunoco's General Manager of Performance Products and Automotive Events. "Enhancing this relationship by including the exciting racing taking place in the Flat Track Series has been a goal of Sunoco's all along. We look forward to providing the series and the riders with the highest quality fuels on the track and exciting marketing activation exposure via our over 4,900 retail facilities and aggressive social media initiatives."
In addition to the role Sunoco will play as the exclusive fuel supplier of the two Series, the agreement also calls for an increased marketing relationship between the two companies, including a number of national advertising and marketing activations focused on expanding the collective reach of the brands through the continued growth of American motorcycle racing.

Sunoco Race Fuels is the fuel of choice for a prestigious lineup of American motorsports organizations, including AMA Pro Racing, NASCAR, GRAND-AM Road Racing and ARCA. Sunoco has also been a consistent and valued supplier to grassroots motorsports, with more than 400 race tracks throughout the United States currently offering Sunoco racing gasoline at their facilities. For more information on Sunoco Race Fuels' premium products, please call 1-800-RACE GAS (1-800-722-3427).
To locate a distributor near you, please log onto Sunoco's cutting-edge and highly-useful online fuel finder at http://www.racegas.com/fuelfinder