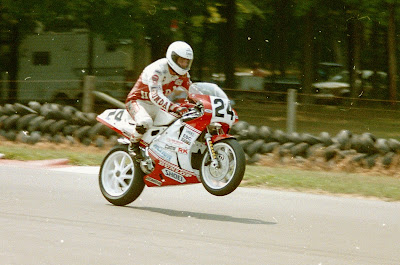 Former Canadian Superbike Champion Rueben McMurter catches some air on his #24 Honda Canada/Action Access/Shoei/RK-sponsored Honda RC30 coming out of the turn 9 area at the Mid Ohio round of the AMA Superbike Championship Series in August '91.  McMurter showed up for the weekend with his trick RC30 V-four and finished in a very respectable 7th-place in the main event of the Wiseco Superbike 100 as part of the Camel Super Cycle Weekend at the Lexington, OH. track, behind winner Thomas Stevens, fellow-Canadian Miguel Duhamel, Tom Kipp, Scott Russell, Freddie Spencer, Dale Quarterley and another fellow-Canadian and future Canadian Superbike Champion, Pascal Picotte.  Jacques Guenette and the late Jimmy Adamo rounded out the top 10.

McMurter was one of the fast Canadians that made the trek to the AMA Superbike Championship Series when the Canadian Superbike Championship had a weekend off, and started racing in the AMA rounds back in the early '80s, finishing 3rd in the overall standings for the '84 season.  His last year of racing in the AMA series came in the '91 season.  McMurter was followed to the U.S. by a handful of other Canadian Superbike Champs including Steve Crevier, Pascal Picotte and Brent McCormick.  McMurter was inducted into the Canadian Motorcycle Hall of Fame in summer of 2011.

You can read more about one of the true heroes of the Canadian Superbike Championship below, from motorcycle and motorcycle racing historian, Cycle News scribe and The Rider Files.com's very own, Larry Lawrence.


Great news from the folks up north comes in the form of the signing of a big NON-industry sponsor to the title sponsorship for the 2012 Canadian Superbike Championship.  Mopar's brand is a highly recognized marque all over the North American continent (let alone around the world!), and brings with it a vast legion of four-wheeled fans that could help to further open the doors for exposure to the two-wheeled racing world.

This should be a great step in bringing in the Chrysler brand's sponsorship to the racing world, and hopefully will help to open the doors for even more non-industry sponsorship in the two-wheeled racing world.

TO, ON (December 9, 2011) - Frontline CSBK Inc., organizer of Canada’s National motorcycle road racing series, is excited to announce that Chrysler Canada’s Mopar® brand is the new title sponsor of the 2012 Canadian Superbike Championship.

“We are thrilled to sponsor the exciting 2012 Mopar Canadian Superbike road race series,” said Jim Kiritsis, Head of Service and Parts, Chrysler Canada. “Our shared passion for performance and dedication to the series provides a great opportunity for the Mopar brand to connect with the fans involved.”

CSBK’s Kevin Graham announces the 2012 schedule, stating “We’re really proud to offer a solid slate of events at popular venues that our competitors support and our spectators enjoy. We are looking forward to a strong 2012 season and it wouldn’t be possible without the valued support of our sponsors, partners, venues, staff and teams.”


The Canadian Superbike Championship’s history stretches all the way back to 1980, when Mississauga’s George Morin earned the inaugural National crown thanks to an early season win at the long departed Edmonton International Speedway. Last year, Saskatoon’s Brett McCormick celebrated his 20th birthday with a Championship-clinching win at the penultimate round of the Championship at Mosport International on Saturday.

For the past decade, the Mosport doubleheader has served as a showcase event for the series, with two National rounds per year at the popular venue. In 2012, the title battle in all the National classes will again be settled with two days of doubleheader race action at the legendary facility.


The sponsors of the 2012 Mopar Canadian Superbike Championship are:

This e-mail address is being protected from spam

And you can check out more of what the 2012 Mopar Canadian Superbike Championship Series will have to offer via their official website here: