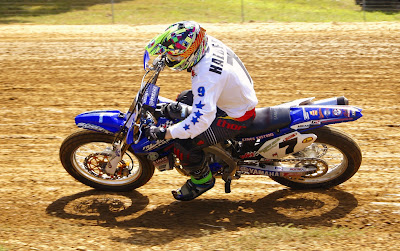 Round 14 of the 2011 AMA Pro Flat Track Harley-Davidson Insurance Grand National Championship Series made it's annual stop at the Peoria TT on August 21, and the fans came out in droves to see the likes of the stars of the series including multiple-winner Henry Wiles, Jake Johnson and Jared Mees do battle in the fields of West Central Illinois.  Mees and Johnson were locked in an epic title fight along with Sammy Halbert, with seven rounds left in the season at the beginning of the day at the natural amphitheatre setting at the infamous Illinois track.

Halbert, on his #7 Woody Kyle Racing/Fredericktown Yamaha/AGV/Kings Kustoms-sponsored Yamaha YZ450F didn't dissapoint the fans, ending the weekend in the 3rd-place and final spot on the podium behind 7-time repeat winner Henry Wiles and championship runner-up Jared Mees, after qualifying 8th on the day (pictured above during qualifying), and going on to finish 2nd in his heat behind Mees.

Slammin' Sammy also nabbed the final point paid out in the Dash by finishing 5th, and at the end of the weekend still held a slim three point lead in the series standings, a lead which he had held since the opening rounds at Daytona in March.  At the end of the season Halbert finished in the 3rd spot in the championship behind Johnson and Mees, and claimed the 2011 AMA Grand National Singles Series Championship at the Springfield Short Track the weekend after Peoria.

Throughout the season (and off season) Sammy stays pretty busy with his various racing programs.  Earlier this season he dabbled in the AMA Pro Vance & Hines XR1200 Series at a couple of rounds of the AMA Pro Road Racing Series, and even took time to ride some speedway, indoor short track and some hare scrambles in Ohio.

Cycle News' Digital edition earlier this week had this story from Jamey Blunt of Sammy Halbert taking the win in the Pro Main at the Perris Speedway round of the SCFTA Series last Sunday (lower left of page):

And Poppa Wheelie was on the scene to capture these pics of Slammin' Sammy riding his Woody Kyle Yamaha to victory at the Perris Speedway event:

And keep up with what Sammy may be racing next here via his Facebook page: