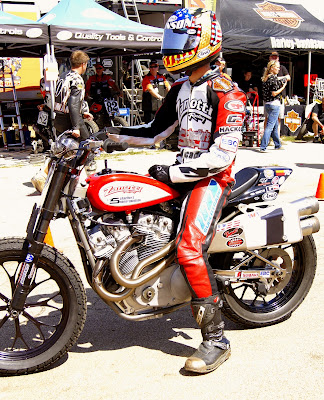 Jake Johnson sits ready to roll out for his heat race on the #1 Zanotti Racing/Schaeffer's H-D/Boughner Racing/Motion Pro-sponsored H-D XR750 at round 16 of the 2011 AMA Pro Flat Track Harley-Davidson Insurance Grand National Championship Series stop at the Springfield Mile II on September 4, where he finished 4th in his heat behind winner and title-rival Jared Mees, Chris Carr and eventual event-winner Willie McCoy.  Johnson went on to finish in the 3rd place spot on the day behind McCoy and Carr to add to his strong year of top-3 finishes for the season.  At the end of the season, with four wins to his total, Jersey Jake would stand on the podium 13 times throughout the season's 20 rounds.

After winning the Salinas TT and the Peoria TT rounds early in the season, some would say that Johnson's season had leveled off.  But the Pennsylvania resident would finish no worse than 8th place in two rounds (Lima, Hartford) for the rest of the season, and would take the points lead going into the final round at Pomona after winning on the half-mile at Calistoga, and would cap his season with a win at the Pomona round to take the 2011 AMA Grand National Championship for the second year in a row while riding for the Zanotti Racing team.

Besides his 13 top-3 finishes on the year, Johnson would also end the season with three Dash for Cash wins (Lake Odessa, Sacramento and Pomona) each worth a valuable 5 points towards his championship tally, and would never fall below the 3rd spot in the overall point standings throughout the season after the 3rd round at the DuQuoin Indoor Short Track in mid-April.

With two Singles Championships to his credit ('06 & '08), Jake now has a double in the overall AMA Grand National Championship to add to his stellar resume.  The first repeat overall champion since Chris Carr ('04-'05), the former New Jersey resident is gradually adding to that resume in terms of wins as well as championships.  Riding for Dave Zanotti, whose father, Mario, won the '79 AMA Grand National Championship with the late Steve Eklund, Johnson's machines and team are always ready to go and at times appear as if ready to be put on display they are so sano.

Fellow Indy resident and Cycle News.com scribe Larry Lawrence made the trek to Eastern Pennsylvania last week to talk with '10-'11 AMA Grand National Champion Jake Johnson for CN's year-end issue.  Check out what LL and JJ talked about and see what The Champ is up to in the off-season: