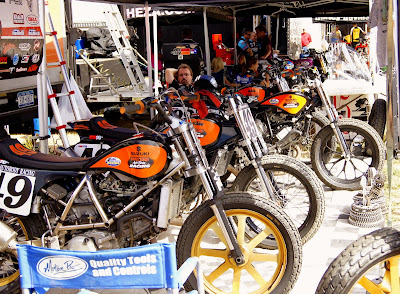 The Waters Auto Body Racing team's mounts of #49 Chad Cose and #82 Jeremy Higgins sit in the team's pit area during round 16 of the 2011 AMA Pro Flat Track Harley-Davidson Insurance Grand National Championship Series at the Springfield Mile II on September 4.  Cose's Suzuki SV650-based mount sits alongside the KTM 950/990 LC8-based mount, as do Higgins' #82 machines in the back of the shot.  Team owner Dave Waters can be seen overlooking his machinery in the rear of the shot.

Cose was able to put the Suzuki in the main earlier in the season at Lima, carding a 16th place finish, while fill-in rider Gerit Callies was able to take the KTM-based Twins effort to a like-result at the season-ending round at Pomona for one of his provisional rides in the Twins Series after campaigning the Pro Singles Series this season.

The team has decided to put the Suzukis on the back-burner for the upcoming 2012 season, concentrating solely on the KTMs, along with retained rider Higgins and new signee Steve Murray #51, and also hooking up with Boughner Racing to help with their suspension needs  The full press release can be read below.

With the rules in AMA Pro Flat Track being said to hold true into the 2012 season, the team has a good base to work with on the KTMs going forward.  Having some of the nicest looking equipment in the pit area coupled with getting some more development work done with the KTM should help them get over the hump in getting the big Twin into National mains on a regular basis and being able to get the power to the ground that the big orange-and-black machines produce.

Waters Autobody/Project K Racing Changing it up in 2012

From a Press Release Issued by Waters Autobody/Project K Racing:


ALBION, N.Y. (December 19, 2011) - Coming off of 2010 with some great finishes and strong showings, we thought we had turned the corner and momentum was on our side. However, 2011 did not turn out to be the year the Project K Racing/Waters Autobody Racing team had hoped to have. Many things contributed to a less than stellar season and it was time for the team owners, Dave & Rhonda Waters, to reevaluate where things were going and what changes needed to happen to go forward into 2012.

One thing that was agreed upon after the final race in Pomona was to park the Suzuki’s. The Suzuki's had become a distraction and had taken away the focus from our original goal. That goal being, to put another brand on the box of the highly dominated Harley-Davidson Insurance Grand National Championship class and our weapon of choice was the KTM 950/990’s with their dependable and reputable LC8 power plants. The final California race was less than kind to our riders and equipment and it was time to get back on track.

Many other dynamics played into the decisions but one thing had been plaguing the team since the start. The LC8 motors had more than enough power but getting it to the ground and through the corners was always a huge issue. The bikes loved cushion tracks and hauled on big miles, but on hard packed half-miles, the handling flaws became more prevalent. Back to square one, get some fresh ideas and start over with the basics.

Many great builders had tried to help but one in particular stood out. While in Sacramento, Marty Lewis from Lazer Racing struck up a conversation with Dave regarding the problems that the riders had been experiencing. Numerous conversations later, it was determined that a new chassis would be built by Lewis from San Leandro, California.

We have a great crew and some even better sponsors but we struggled with set up and needed to make some serious changes. We needed a person willing to do the homework necessary to work with the new chassis design and power plant combination.

One name kept coming back into the conversation, and after discussing at length our mission, it was decided to that Mike Boughner of Boughner Racing, located in Tawas City, Michigan would be our guy for suspension.

Boughner had this to say regarding the collaboration on the team, “I’m sure I can be an asset to your program and would look forward to the challenges of working with your KTM's.”

But certainly the most exciting change has to do with the core of the team. We are extremely proud to have Steve Murray joining us to be Jeremy Higgins teammate in 2012. “Murrdizzle” as he is affectionately known on the circuit, has the experience needed to give the Waters Autobody Racing team important feedback required to make things happen. Steve, like his teammate Jeremy, is very 'hands on' and both riders opinions will be paramount to take us to the next level of competition.

Murray 26, originally from Grand Blanc, Michigan, was a regular on the circuit with the renowned Michigan Mafia crew. He currently resides in Kansas City, Missouri and has an Associates Degree in Website Design from ITT Tech & a Bachelors Degree in Business Administration from Cleary University. Steve has fielded his own race program with success but Waters Autobody Racing feels we can give both riders the support and opportunities to achieve the results they desire with this team and with the addition of our new sponsors.

Steve Murray: "I'm really excited to be joining the Waters Auto Body Racing team for the 2012 Season and riding their KTM Twins and having Jeremy Higgins as my teammate. I'd like to thank Dave and Rhonda Waters and all of the team’s sponsors for the opportunity. Developing the KTM's will be a task but I'm confident that Jeremy and I can get Dave and crew the appropriate feedback to be contending for podium positions."

We are pleased to have Steve Murray and both Lazer Racing & Boughner Racing on board for 2012 and are excited about the possibilities that they both have to offer.

We would also like to thank our existing sponsors that are back on board for the 2012 season:

In the spirit of the upcoming holiday and race season, we feel truly blessed to have such a wonderful program and many exceptional people contributing and are looking forward to a great 2012.

You can check out more about Waters Auto Body Racing's Project K racing team here via their official site:

And you can take a look at Waters Auto Body's facilities in Albion, NY here: