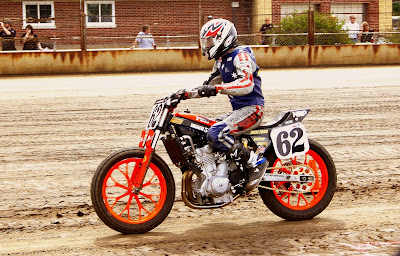 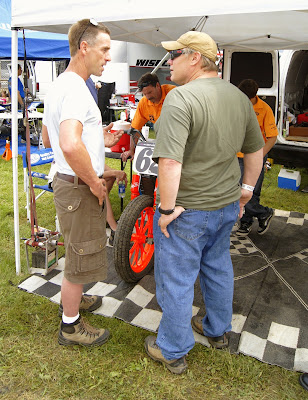 At the next Twins Series round at the Springfield Mile II on September 4, Gough put the Rick Howerton-built machine into it's second-straight final.  Practicing in the top 17, he went on to qualify 9th on the Kaw, just .306 seconds adrift of fast man Kenny Coolbeth, Jr. on the #2 Harley-Davidson Motor Co. factory XR.  He then went on to finish 3rd in his heat behind winner Sammy Halbert and runner-up Bryan Smith, just .247 seconds behind what was virtually a dead heat between the top 2 for what was a very strong run.

On the warm up lap, eventual event winner Willie McCoy rolls off the line as Gough, Matt Weidman #20, Rob Pearson #27 and Jake Johnson #1 get the signal to roll from AMA Pro Flat Track official Kelly Bell. 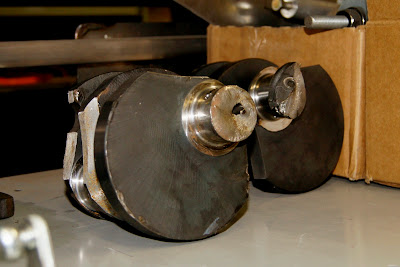 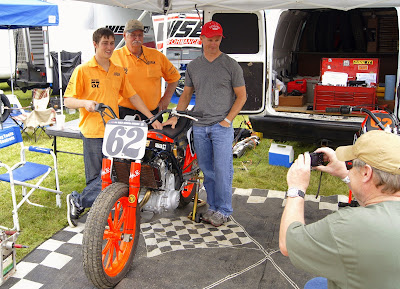 Rider Luke Gough, team owner and long time tuner to the stars Skip Eaken, and Rick Howerton, the builder extraordinaire of the Eaken Racing Kawasaki, pose for a team shot for Cycle News.com's Larry Lawrence during the debut of the machine at round 6 of the 2011 AMA Pro Flat Track Harley-Davidson Insurance Grand National Championship Series at the Springfield Mile on May 29.

After over 1700 hours of thought, work and sweat in getting the machine ready to race at Springfield, the team rolled out what is one of the finest specimens of current flat track technology out there.  With the advent of the Werner/Springsteen Kawasaki and the Scott Powersports Kawasaki of Johnny Lewis during the 2010 season, the Eaken Racing team also dipped their toe into the rule book to come up with a dry weight of around 285 lbs. for the parallel twin machine.  With vinyl graphics that reach out a grab you, the machine is a work of art, and is steadily gathering steam to be regularly competitive in the AMA Flat Track Twins Series for the upcoming new season.

Rick Howerton told me on my visit to his shop last week that the team is working strongly to try and be a top-5 competitor with the Kawasaki.  And when talking with Gough at the Springfield Mile II just before he made the main, he was slowly but surely coming to grips with the power and handling of the bike.  It seems the high-spinning bike has plenty of power ('well over 85-90 HP' per builder Howerton), it's just harnessing that power to the ground that they are working on now.