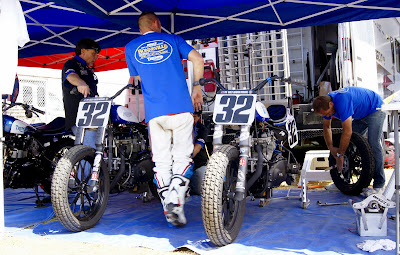 Bill Gately looks over his team's pit area at the Springfield Mile II round of the 2011 AMA Pro Flat Track Harley-Davidson Insurance Grand National Championship Series on September 4, while the team's techs get rider Shawn Baer's mounts ready to roll for round 16.  The #32 Bonneville Performance/Wiseco Pistons/GBR/Eckhart Roofing-sponsored Triumph 855-based mounts are immaculately prepared by the Florida-based team, and are easily some of the finest looking machines in the pit area.

With new signee, '11 AMA Pro Singles Champion Mikey Martin joining the team along with the Triumph factory lending support to the Bonneville Performance Triumph squad, the team should be able to step up in making some Expert Twins Series main events and in getting over the mechanical failure hump that has plagued the team in the '10-'11 seasons, where they only were able to qualify for four main events.  Baer had one of his best rides in his two years with the team at the 2010 Lucas Oil Indy Mile in winning his semi to qualify for the National main event in front of the MotoGP weekend crowd.

With Triumph having been out of any official factory participation in the AMA Grand National Championship Series for over three decades, it will be good to see a second factory-supported team at the big tracks in the 2012 season.  Triumph has a long history of involvement in American flat track racing, with big name riders such as Gary Nixon, Gene Romero, Gary Scott and Mike Kidd, among others.  Maybe one day Mikey Martin's name will get to be bunched in with that list of former AMA Grand National Champions.

The flat track phenom who raced his way to the 2011 AMA Pro Singles championship, Mikey Martin, is on his way to the Grand National circuit in 2012 as part of the Bonneville Performance Triumph factory team.

Martin starts his rookie season in the Expert Twins class as part of the team put together by Bill Gately, who has been racing and perfecting the big British bike for several years.  “What drew us to Mikey is that he’s a talented, aggressive rider who’s also smart,” Gately said.

"He only wants to ride in front, and that’s the kind of guy you're looking for.  He’s already a champion.  Plus, he has a great personality and knows how to present himself off the track as well as on."

Despite his youth, Martin has a long pedigree in racing – and connections to Triumph. His father was a racer and currently is an AMA flat track promoter.

His grandfather was a Triumph dealer who sponsored a number of riders in the late 60s and early 70s.

“Joining the Bonneville Performance team and becoming the factory rider for Triumph is a huge honor, and the perfect fit for me,” said Martin.  “Bill Gately has built an incredible machine.  They've had their hand on every part of this bike and there’s nothing they haven't improved.

"Their level of commitment and dedication is impressive.  I'm excited to be on the bike and looking forward to a great season.”

You can see what Bonneville Performance has to offer here, specializing in all-things Triumph:

And the great lads across the pond at Sideburn Magazine posted this info from the Bonneville Performance flat track team:

Poppa Wheelie has these great photos from the season-ending round at Pomona of the Bonneville Performance Triumph team: