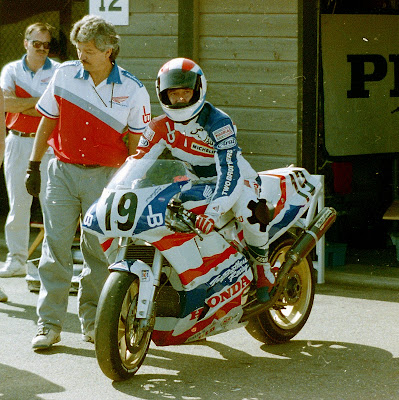 Crew chief Mike Velasco looks on as his rider, Freddie Spencer gets ready to roll out to the grid on the #19 Two Brothers Racing/Honda Motor Co/D.I.D./Ohlins-sponsored Honda RC30 at the Mid Ohio round of the AMA Superbike Championship Series in August 1992.  Despite a row 2, 5th-place starting spot on the grid, 'Fast Freddie's was slowed in the Wiseco Superbike 100 race as part of the Camel Super Cycle Weekend presented by Dunlop event, and went on to finish in the 23rd spot.

One of the all-time motorcycle racing greats, Spencer burst onto the AMA scene during the '79 season winning his first AMA National event at Loudon in the 250 GP/Lightweight class, and went on to win the championship that year.  The Louisiana-born rider also won his first AMA Superbike race while riding for Kawasaki in '79, before signing with American Honda for the 1980 season.

After splitting time in the AMA series and in Europe while riding for Honda Japan, Spencer headed overseas full-time for the 1983 season, where he captured his first of two 500CC World Championships in a battle that went down to the wire with rival Kenny Roberts.  Spencer lost the title to sophomore GP and Yamaha teamster Eddie Lawson in the '84 season, but came back to do the impossible in winning both the 500CC and 250CC World Championships in the '85 season.

Spencer rode for the Two Brothers Racing Honda team and the Fast By Ferracci Ducati team in his return to U.S. racing in the early-mid '90s, where he won three more AMA Superbike Championship Series events.  Two of those wins came on the TBR Honda RC30 at the Miami street race in late '91 and on the FBF Ducati at Laguna Seca in '95, and he is also the only man to have ever won all three premier events at Daytona, which he accomplished in '85 by winning the 250/Lightweight, Superbike 100 and Formula One 200 by Arai.

'Fast Freddie' Spencer was inducted into the AMA Motorcycle Hall of Fame in 1999, and you can read his bio here:

Back in the early '80s and the days of the inline-4 1025cc motors in the AMA Superbike Championship, tires and suspensions had not yet come close to being able to handle the amount of power that the big roaring motors put to the ground.

Honda and Peter Starr Films put together some promo films back in those days, and this first part of one of those about Freddie Spencer and the iconic Honda CB750F, from the '81 season is worth the time to check out.  Freddie on the banking at Daytona on what is still considered by many to be the all-time best sounding superbikes of all-time will bring chills up and down your spine.  If not, better check that pulse.