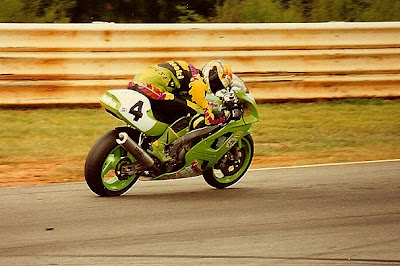 The end of the '94 AMA Superbike Championship came down to the final round at Road Atlanta in September '94, and saw Australian Troy Corser on a Fast By Ferracci Ducati pull it out over Vance & Hines Yamaha's Jamie James in the closing laps of the final when James' Yamaha suffered mechanical ills and Corser was able to cruise home ahead of James to secure the championship.

But the sub-story for the weekend involved defending '93 World Superbike Champion Scott Russell in his return to the States aboard his #4 Muzzy Kawasaki.  Russell dominated the weekend's events from the start, and went on to win the race by over 10 seconds in what was a rare appearance in the AMA Superbike Championship that year due to his WSBK duties.

DAYTONA BEACH, Fla. (December 2, 2011) - AMA Pro Racing will be working in conjunction with M1 PowerSports for promotion of three exciting new events as part of the 2012 AMA Pro Road Racing schedule. Each of the three events promoted by M1 PowerSports, formally known as M1 Entertainment, will be modeled after the highly successful AMA Pro Road Racing events that the group promoted and grew over a 10 year span at racetracks in the Southeast.


The original Big Kahuna events were known for delivering exceptional entertainment value alongside world-class racing by America's finest motorcycle road racing talent, and fans can expect that same Big Kahuna Show as M1 PowerSports returns to promoting motorcycle road racing with an expanded portfolio of AMA Pro Road Racing events in major Southeastern markets.
"M1 PowerSports is extremely excited to return to full time event promotion in 2012," said Cameron Gray, President of M1 PowerSports. "The Big Kahuna Nationals have a long and rich history in AMA Pro Racing and we are excited about our new relationship with the series. Promoting motorcycle road racing events is our passion and what we do best. We look forward to a long and fruitful relationship putting on some of the most thrilling racing events in the country."
"For much of the past three months, I have been and traveled with I-San, Danny Walker and Cameron back and forth across this country, and enjoyed every minute of it," said David Atlas, Chief Operating Officer of AMA Pro Racing. "I've gotten to know them well, and they and their staff at M1 PowerSports have proven that they know how to deliver entertainment value that goes perfectly hand-in-hand with the outstanding racing found at our events. The new events, which they will bring to our series in 2012, promise to be some of the most exciting stops on our schedule. I am so proud of their joining forces with us."
M1 PowerSports began promoting the Big Kahuna events at Road Atlanta as part of the 1998 AMA Pro Road Racing season and the series will make a return to the 2.55-mile circuit in the hills of Braselton, Ga. for the Big Kahuna Atlanta on the weekend of April 20 - 22, 2012. The track is located just 35 miles outside of Atlanta and has a rich history with AMA Pro Road Racing dating to back to Eddie Lawson's 1980 AMA Pro National Guard SuperBike victory. The series last raced at the facility in 2010, where fans witnessed Blake Young sweep the National Guard SuperBike doubleheader weekend in dramatic fashion.
"Road Atlanta has had a storied legacy of terrific top level professional two wheel racing over its 40+ years," said Geoff Lee, President of Road Atlanta. "We have been staying close with AMA Pro Racing in the hopes of being able to strike a relationship to bring their series back here soon. This could not possibly be a better way to do so. We, and our fans, are thrilled to have M1 PowerSports returning and bringing the Big Kahuna back to Road Atlanta where it began. With an event of this stature in place again we look forward to more great racing and adding many more years of 'legend and lore' to our motorcycle history at Road Atlanta."
AMA Pro Road Racing will head south after the New Jersey Motorsports Park round for the inaugural Big Kahuna Miami, scheduled for the weekend of September 21 - 23, 2012 at Homestead-Miami Speedway, which is located south of Miami in Homestead, Fla. As fall weather begins to draw in across the country, fans will find the Miami area a tropical oasis while being treated to an entertainment spectacle from M1 PowerSports and the stars of AMA Pro National Guard SuperBike, AMA Pro Daytona SportBike, AMA Pro Motorcycle-Superstore.com SuperSport and the AMA Pro Vance & Hinex XR1200 Series.
"We are thrilled to partner with M1 PowerSports to bring the AMA Pro Nationals to Homestead-Miami Speedway," said Speedway President Matthew Becherer. "Our track will be active more than 280 days in 2012, and this event - featuring the biggest motorcycle series in North America - is a great opportunity for South Florida."
Two weeks later, the AMA Pro Road Racing season will come to a close at America's newest racetrack, with the Big Kahuna New Orleans scheduled for the weekend of October 5 - 7, 2012 as the first professional motorsports event to be held at NOLA Motorsports Park. The track, which was designed by Alan Wilson, is located just 20 minutes from the historic French Quarter area in downtown New Orleans, La. The state-of-the-art facility features excellent areas for spectator viewing and is focused on making motorsports accessible to a broad range of enthusiasts across all facets of the motorsports community. AMA Pro Road Racing will hold the season-ending awards banquet in the New Orleans area on the Monday evening following the event.
"We are excited to be partnering with AMA Pro Racing and M1 PowerSports for our inaugural professional event," said Mitch Wright, General Manager of NOLA Motorsports Park. "M1 PowerSports has a proven track record of fun, fan-friendly motorcycle events and the riders in AMA Pro Road Racing put on an incredible show. New Orleans and NOLA Motorsports Park will provide the perfect place to cap off their season and have one heck of a party."
AMA Pro Road Racing competitors will have the opportunity to check out each of the new tracks before the respective event weekends in a set of official series tests. In an effort to reduce the costs associated with traveling to these tests, each will be held following an event in the same region. The test at Homestead-Miami Speedway will be scheduled for soon after the Daytona 200 event weekend and the NOLA Motorsports Park test will be held soon following the event at Barber Motorsports Park. Full details about the test events will be released at a later date.


New Jersey Motorsports Park
Millville, N.J.
September 21 - 23, 2012*
Homestead-Miami Speedway
Homestead, Fla.
October 5 - 7, 2012*
NOLA Motorsports Park
New Orleans, La.
* Events promoted by M1 PowerSports
The mission of M1 PowerSports is to "Get People to the Track," and the company is launching a new website at www.m1powersports.com. Information about the launch of the new website and ticket sales will be released in the coming weeks.