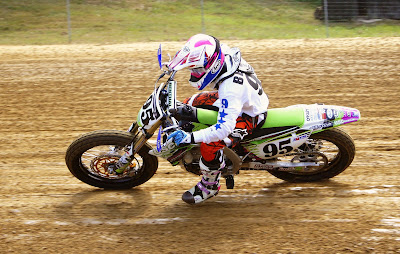 JD Beach on the #95 USC Kawasaki works his way into turn 5 at the Peoria Motorcycle Club's annual gathering during qualifying for round 14 of the 2011 AMA Pro Flat Track Harley-Davidson Insurance Grand National Championship Series on August 21.  The Peoria TT is the oldest venue on the AMA Pro Flat Track Series schedule and has been hosting Grand National events for over 60 years.

With the AMA Pro Road Racing Series having the weekend off, Beach was one of 39 Expert riders that showed up to do battle at the legendary track.  With practice times that put him in the top 20, he went on to qualify 17th, .731 seconds behind fast-man and eventual event winner, Henry Wiles.

With a 3rd place finish in his heat behind winner Jared Mees and runner-up Sammy Halbert, JD put on a good show while racing the National main with Brad Baker, Aaron King and Jeffrey Carver, Jr, and went home with a hard-earned 13th place finish on the Universal City Kawasaki Motorsports/Morlandt Electric/Alpinestars/Arai-sponsored KX450F.

The Philpot, KY. resident has been spending his 'off-season' racing the Steve Nace Racing 2012 AMA Racing Indoor Dirt Track National Championship Series at DuQuoin, IL.  In the first three rounds of the series, Beach has been running the Open Pro Am, 450 Pro and Open Pro classes in the short track events, as well as the Open Pro Am in the TT events, and has pulled out wins in 8 of the 12 races he has run, while racing with talent like 2010 AMA Pro Singles Champ Jeffrey Carver, Jr, former 2-Time AMA Flat Track Singles Champ Henry Wiles and AMA Pro Singles rider Hayden Gillim, just to name a few.

In the other four rounds he has raced, he's finished either 2nd or 3rd.  Not too bad for someone who spent more time road racing during the 2011 season!

JD, Henry and Hayden are all expected to be on-hand for round 4 this coming weekend.  Tyler Porter mentioned on his FightForDirtTrack.com's InSlide Line column last week that Jared Mees, Cory Texter, Chad Cose and Rob Pearson could all be on-hand to race the New Year's Eve event and take part in the Ethan Gillim Memorial race event. 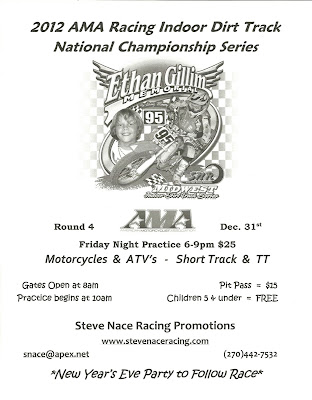 You can keep up with the events of this weekend as well as the whole Steve Nace Racing indoor series here via their official website:

Check out round 3 action at the Southern Illinois Center of the Steve Nace Racing indoor series here, thanks to this neat video put up by Mia Moore and Chew Larcom, the Fans in the Stands from FlatTrack.com:

Need to find your way to the Southern Illinois Center in DuQuoin, IL.?: