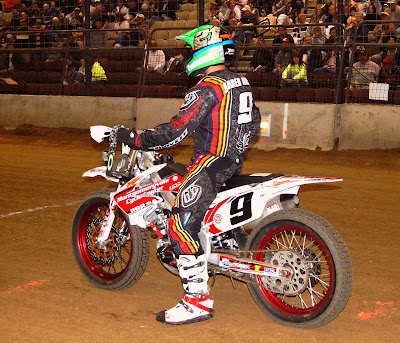 Jared Mees waits on the red flag delay during his heat race inside the Southern Illinois Center at DuQuoin, IL. at round 3 of the 2011 AMA Pro Flat Track Harley-Davidson Insurance Grand National Championship Series on April 16.  Jammin' Jared took his #9 Montgomeryville Cycle Center/Lucas Oil/Rogers Lake Racing/Saddlemen-sponsored Honda CRF450R to the win in heat 3 on the day over Jesse Janisch and Johnny Lewis, and went on to finish 4th in the Dash for Cash event and in the National main event at the Steve Nace Racing-promoted event.

Mees, a 3-Time and defending 2-Time ICE Speedway Series Champion, is planning on contending the ICE Series again this season and will be on-hand at the season-opening round this Friday, January 6 at the Sovereign Center in Reading, PA.  Mees made the announcement this week on his Facebook page, Jared Mees Fan Page.


INTO ACTION THIS WEEKEND!!

The indoor ice racing season goes WFO in a big way Friday night kicking off a double-header weekend. Round-1 of the 36th Annual World Championship ICE Racing Series is being held at the Sovereign Center Arena in Reading, PA. Saturday night the best in ice racing will mount back up for Round-2 at the Hampton Coliseum in Hampton, VA. The action in this winter's World Championship chase will definitely be fast and furious as it will be contested over just 5 consecutive weekends in 6 different cities.


The ICE/Int'l Championship Events produced & sanctioned series attracts some of the biggest names in flat track racing as witnessed by its recent World Champions roster in the Manufacturers World Cup Motorcycle Division. Represented on this list are none other than "Showtime" Johnny Murphree, "Smokin" Joe Kopp, Kevin "The Viking" Anderson and 3-time Champion, including the past two seasons, "Jammin" Jared Mees. Check out the action when the big boys battle it out on the tight short tracks of the ICE WC Series. The speeds aren't as high as the mile tracks but the bump'n & bang'n factor is way up there!

The second professional racing division featured on the World Championship Tour are the ICE Unlimited Outlaw Quads. The stellar field of 4-wheel competitors will be headed up by The First Lady of ICE Racing, 4-time World Champion Mandy Brodil Cervantes racing out of North Carolina. All eyes will be on the "Wild Child" as she tries to "Arrive At 5" by the season's conclusion in this rough and tumble previously male dominated sport.
No other racer has been upside down, banged up and bruised on the ice more than Brodil. Somehow she just keeps coming back and winnings races. Other top pros hoping to win their first World Title are "Sideways" Sammy Wiggins on the Major Event winning Harley-Davidson powered "Thunder Quad", Chuck Calvert on his one-of-a-kind "Honduki" Quad, "Time Bomb" Dusty Crouch, Team Kansas Tornados just to name a few.
No holds barred, anything goes open quad racing for lots of cash and a coveted Big Stud Trophy, all on ice - definitely a must see event!

Select amateur classes are also open to local riders wishing to give it a go on the ice in front of their hometown fans. Classes offered include everything from Amateur Quads to Studless Scooters with a passenger. Visit www.icespeedway.com for details about classes and competing.