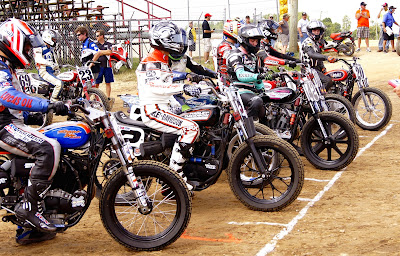 Riders get ready to roll out for the 2nd practice session at round 11 of the 2011 AMA Pro Flat Track Harley-Davidson Insurance Grand National Championship Series at the I-96 Speedway in Lake Odessa, MI. in preparation for the day's upcoming 25 lap National main event.  The unofficial start to the second half of the season would see 51 riders take a qualifying time, with 48 of those qualifying within less than 1.5 seconds of fast man-on the day, Brad Baker on the #12 Lloyd Brothers Motorsports Ducati.  At the end of the day, Jared Mees, Bryan Smith and Jake Johnson would celebrate on the podium before the series would make it's 2nd of 3 west coast swings for the year.


The half-mile event scheduled for June 30, 2012 will see the stars of The Rolling Thunder Show return to the track that has hosted the AMA Pro Flat Track Series for several years now.  The mid-summer event signaled the start of the second half of the season in 2011 that would see Jared Mees continue his winning streak in the Twins Series, propelling him into the championship series lead before falling behind to eventual repeat champion Jake Johnson's charge at the end of the year.

With AMA Pro Flat Track's 2012 schedule announcement just less than three weeks ago, one of the three open 'TBA' dates has now been made official today with the signing of USA Raceway in Tucson, AZ. to host a round of the series on October 6, 2012 making it the penultimate round for the upcoming season.  As of today that leaves the two open date of June 9 and September 15 to complete the full line-up for the coming year.

AMA Pro Racing Adds USA Raceway to 2012 AMA Pro Flat Track Schedule
DAYTONA BEACH, Fla. (January 9, 2012) - AMA Pro Racing is excited to add USA Raceway in Tucson, Ariz. to the 2012 AMA Pro Racing Flat Track Schedule. The event will fill the October 6, 2012 TBA date on the previously-announced 2012 AMA Pro Flat Track Harley-Davidson Insurance Grand National Championship presented by Motorcycle-Superstore.com schedule.
Arizona's premier 3/8-mile dirt track, USA Raceway is a relatively new track. The modern facility, which opened in 2005, normally hosts Late Model Stock Cars and Sprints Cars, but the AMA Pro Grand National Championship has visited Tucson before. In 2007, there were actually two Nationals in one weekend there.
The Raceway hosted both GNC Singles and GNC Twins rounds in what would be the last races of the year. Jake Johnson, aboard a factory-backed Suzuki, won the first night over teammate JR Schnabel and Bryan Smith on a Honda. The next night, Kenny Coolbeth locked up the number one plate with a second-place finish behind Joe Kopp, with Rich King taking third to make it an all Harley-Davidson podium.

The AMA Pro Flat Track Harley-Davidson Insurance Grand National Championship presented by Motorcycle-Superstore.com and the AMA Pro Flat Track Motorcycle-Superstore.com Pro Singles will conclude the 2012 season on the west coast, the October 6 date placing the Tucson, Ariz. event on the weekend between California races in Santa Rosa and the finale at Pomona.