Jared Mees Goes 4-For-4 in Winning 2012 ICE Speedway Series Round at Bloomington, IL on January 21 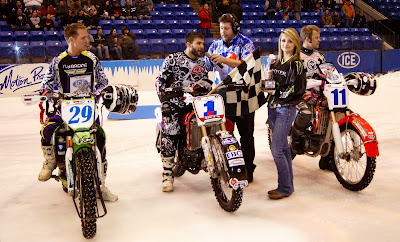 Jared Mees talks with the ICE Speedway Series announcer after winning his fourth main event of the 2012 season at the U.S. Cellular Coliseum in Bloomington, IL. on Saturday, January 21.  The 3-Time and defending ICE Series Champ took his #1 Honda to the win in front of an enthusiastic crowd at round 4 of the ICE Speedway Series season in the Manufacturers Cup Bike class ahead of runner-up Kevin Anderson #11 on his Honda and 3rd place finisher Jake Mataya #29 on his Kawasaki.

The Jammer won both of his heat races to go along with his main event win in a field filled with several AMA Pro Flat Track regulars, including Rob Pearson, Justin Hittle and Brandon Robinson, to further his grip on the 2012 Manufacturers Cup Championship.  Anderson, the '09 ICE Series Champion, had a good night as well in winning his first heat and coming in second to fellow-Minnesota resident Mataya in his other heat.  Mataya also won both of his heats on the evening.

One of the heat races on the evening shows eventual main event runner-up Kevin Anderson #11 leading Kirk Cheney #15, with AMA Flat Track regular Justin Hittle #81 and former AMA Grand National competitor and Clermont, IN.'s Dan Ingram #22 trying to keep them honest.  Ingram made the trip over with his father, Sam, also a former flat track competitor from back in the '70s.

Ingram is in the process of trying to gain enough points in the AMA Pro Flat Track Pro Singles Series and also in Steve Nace's DuQuoin indoor series to get his Expert license again.  He's hoping to be able to hit the track at the first Expert Twins Series event of the season at the Memorial Day Weekend Springfield Mile.

Dan had a rough go of it in Bloomington, though.  Finishing 4th in his first heat, he was forced to borrow a competitor's bike to run his second heat when his mount wouldn't fire.  He ended up 4th in that second heat and failed to make the main event. 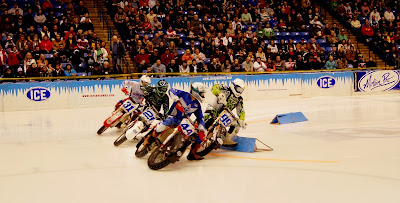 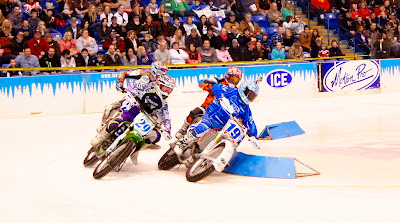 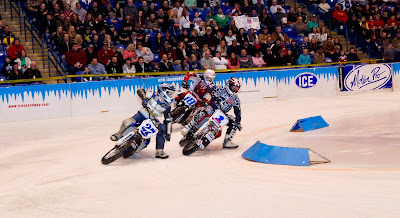 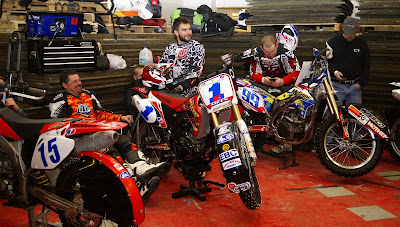 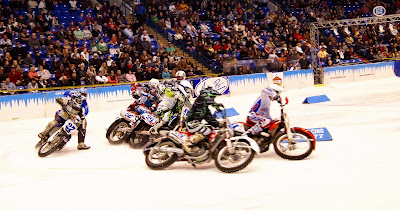 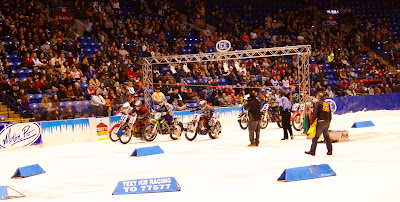 Later this week we will be doing another story on our trip over to Bloomington that will include some of the action in the Outlaw Quads class featured in the ICE Series.  Stay tuned, but in the meantime you can check out some other info on the ICE Speedway Series.  I highly recommend putting one of these events on your calendar, you will NOT be disappointed!

And a tip of the helmet and a big thanks go out to Brent and Tiffany Densford for putting on a super show in Bloomington and for letting Stu's Shots be a part of a great night!


You can keep up with ICE Speedway events here via their official site below.  Round 5 of the season wraps up the shortened 2012 schedule on February 4 at the Cambria War Memorial Arena in Johnstown, PA. at 7:30 P.M. EST.

And check out some past video action from ICE Speedway at the U.S. Cellular Arena in Bloomington, IL. here thanks to MXPTV.com: