AMA Flat Track: IMDA Now Has Tickets On Sale for Both 2012 Springfield Rounds 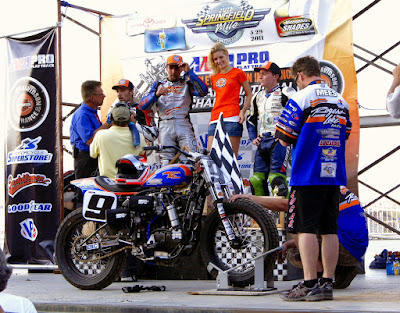 After a thrilling 15 1/2 minutes and 25 laps of bar-to-bar racing, round 6 of the 2011 AMA Pro Flat Track Harley-Davidson Insurance Grand National Championship Series at the Springfield Mile I would come down to the three men who would control the championship throughout the year ahead and provide fans with a battle for the ages.  And it would provide a glimpse of what the chase for the championship would bring through the next 14 rounds of the long season ahead.

Mees won by a margin of .016 seconds over Halbert, with Johnson just a scant .052 seconds adrift of Slammin' Sammy.  The margin of victory and the three men that shared the podium that day all-but set the stage for a championship chase that would go down to the final round of the season at Pomona in October, some 18 weeks away, in a battle to the end with three of the finest, fastest and smoothest that the sport has to offer.

In the end, Jersey Jake would triumph again, garnering a repeat AMA Grand National Championship for the '11 season to go along with the '10 AMA Grand National Championship that he won with the Zanotti Racing team in his first year with them.  Mees would finish in the runner-up spot (386-370 points) after mounting a charge in the mid-section of the season that would see him eventually win 5 National mains on the year.  And Halbert would slide home in the 3rd spot in the championship battle on his Kings Kustoms machines after holding claim to the title for the better part of the year, and equaling Johnson's four wins on the season (369 points.)

As mentioned in an earlier story from this morning, after the 2012 season the Springfield TT and Short Track rounds that have made for a super double-weekend of racing since the '00 season will be going by the wayside, thanks mainly to a still-lousy economy and essentially not being able to put and keep paying butts in the seats.

Of course, there are many who come to Springfield only for the 135 MPH+ battles on the Illinois State Fairgrounds mile oval.  But for many truly-diehard fans who have lived for the doubleheader rounds that the Multipurpose/Rodeo Arena offered in conjunction with the most famous race in the flat tracking nation, the TT and Short Track offerings have been like a gift from above.  And they will be sorely missed.

You can get your tickets now for both doubleheader rounds over the Memorial Day and Labor Day weekends for the '12 and final season of double-fun.  And maybe with any luck, the increased crowds this year will help to re-justify to the IMDA that the Singles Series rounds need to be put back on the schedule after all.

So come one and come all for some of the best racing that The Rolling Thunder Show has to offer in the greatest sport on wheels in the world!

A press release issued by the IMDA, promoters of the Springfield Nationals

SPRINGFIELD, Ill. (January 5, 2012) -The Illinois State Fairgrounds in Springfield, Illinois, has hosted more AMA Pro Flat Track Grand National Championship races than any other venue in the history of the sport. 112 Nationals have been held at the prestigious Fairgrounds. Not only does it offer a rich tradition in dirt track racing but Springfield has also hosted a variety of racing disciplines.
With 88 mile races, 13 short tracks and 11 TT races, it's no wonder Springfield is known as the flat track fraternities racing capitol. The second race on the AMA Pro Flat Track schedule with more history then all the other tracks is Peoria, Illinois with 82 Grand National races. It becomes very clear, if you want to see the best racing there is, you need to get to Illinois.
This year it is more important than ever to attend the Springfield races. Because of the difficult economic times and the high cost of holding these races, this will be the last year for the Short Track and TT races. Perhaps in the future when times get better and there is more demand to see the singles races, they can return but for 2013 they will not be on the schedule. This has been a very difficult decision for the Illinois Motorcycle Dealers Association (IMDA) who started the extra events in 2000 when the new Multi-Purpose facility was built at the Illinois State Fairgrounds.
Jay Hall, president of the IMDA said, "We regret that we have been forced to make this decision but in order to keep our association going we have to do this, at least for now. We take great pride in what we have been able to do for this sport but for 2013 we will focus on mile races which is the most historic and why Springfield is so well known."
Tickets for all four IMDA promoted Grand Nationals at Springfield are now on sale. If you have always wanted to attend the Saturday night TT and/or Short Track races, 2012 is your last chance.
You can order tickets by calling the IMDA office at 217-753-8866 or 888-468-1622. You can also stop at your local motorcycle dealer. If they don't already sell Springfield tickets, let them know you want them to. Any motorcycle dealer is eligible to become a ticket outlet.