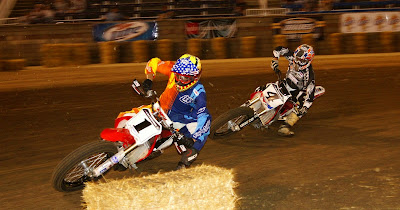 Jake Johnson on the #1 Zanotti Racing/Schaeffer's H-D/Boughner Racing/Motion Pro-sponsored Honda CRF450R leads Chris Carr on his #4 American Motorcyclist Assoc/DFW Honda/Classic H-D/Arai-backed Honda during their intense heat race 1 battle at the Springfield Short Track on September 3, round 15 of the 2011 AMA Pro Flat Track Harley-Davidson Insurance Grand National Championshipship Series.  Johnson would hold off Carr for the 2nd spot in their heat, behind eventual event winner Henry Wiles.  Wiles won by .338 seconds over Johnson, with Carr just another .351 seconds back.


The upcoming 2012 season will be the 13th season that the IMDA has hosted events at the Illinois State Fairgrounds Multi Purpose/Rodeo Arena, as part of the long running events on the Springfield Mile held over the Memorial Day and Labor Day weekends.  With either (or both) a short track and TT round held at the little bull ring since the 2000 season, the events have been a great addition to the racing program at the legendary facility.

Although not able to bring in the big crowds that the mile events are known for, the arena facility has been a very nice venue and track over the years, and riders like Jake Johnson, JR Schnabel, Jr., Chris Carr, Nicky Hayden, and Henry Wiles have laid their claim to fame and fortune on the little short track and TT events. 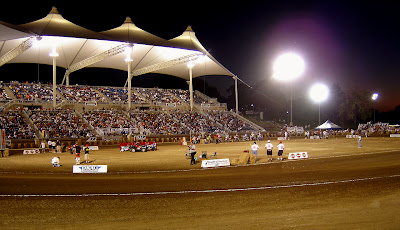 Riders line up and photographers take their positions as racing is about to begin at the Springfield Short Track round of the 2005 AMA Pro Flat Track Ford Quality Checked Flat Track Championship Series on September 3.  The Multipurpose/Rodeo Arena at the Illinois State Fairgrounds is a beautiful facility that has hosted rounds of the AMA Grand National Series since the 2000 season.

With reserved seating available under the main awning, the opposite hillside offers an amphitheatre-style seating where fans can bring out their blankets and spread out for a great view of the entire track layout.  Between the IMDA and the people at the Illinois State Fairgrounds, the grounds and facilities throughout are always spotless and very family-friendly.

One of the allures of both rounds at Springfield has most always been that the doubleheader round has pretty much been not only the kick-off for the season (after what has been usually a 2 month break from Daytona), but also in it's own right a little bittersweet in that it also hosts what has been close to the last rounds of racing on the year (at least in the Midwest), thusly bookending the season of racing in the AMA Pro Flat Track Grand National Championship Series.

What's even more bittersweet is we are not only losing another two rounds of action on the schedule, but a great place to see some killer racing as well!  Although it may be too late for the 2013 season, you owe it to yourself to spend a weekend at one (or both) of the 2012 Springfield rounds to take in what this special place has to offer in the way of high-powered racing.  You won't be dissapointed!

The Illinois State Fairgrounds in Springfield, Illinois, has hosted more AMA Pro Racing Grand National Championship races than any other venue in the history of the sport. 112 Nationals have been held at the prestigious Fairgrounds. Not only does it offer a rich tradition in dirt track racing but Springfield has also hosted a variety of racing disciplines.

With 88 mile races, 13 short tracks and 11 TT races, it’s no wonder Springfield is known as the flat track fraternities racing capitol. The second race on the AMA Pro Racing schedule with more history then all the other tracks is Peoria, Illinois with 82 Grand National races. It becomes very clear, if you want to see the best racing there is, you need to get to Illinois.

This year it is more important than ever to attend the Springfield races. Because of the difficult economic times and the high cost of holding these races, this will be the last year for the Short Track and TT races. Perhaps in the future when times get better and there is more demand to see the singles races, they can return but for 2013 they will not be on the schedule.

This has been a very difficult decision for the Illinois Motorcycle Dealers Association (IMDA) who started the extra events in 2000 when the new Multi-Purpose facility was built at the Illinois State Fairgrounds.

Jay Hall, president of the IMDA said, “We regret that we have been forced to make this decision but in order to keep our association going we have to do this, at least for now. We take great pride in what we have been able to do for this sport but for 2013 we will focus on mile races which is the most historic and why Springfield is so well known.”

Tickets for all four IMDA promoted Grand Nationals at Springfield are now on sale. If you have always wanted to attend the Saturday night TT and/or Short Track races, 2012 is your last chance.

You can check out the official dates for all events that will promoted by the Illinois Motorcycle Dealers Assoc. (IMDA) for the 2012 season here: