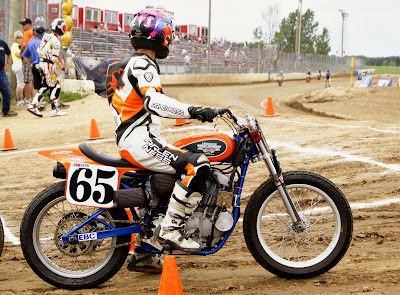 After both practice and qualifying sessions were over, C-Tex had qualified his #65 Lancaster H-D/Screamin Eagle/Herrs/Invisible Glass-sponsored XR750 with a time of 23.087, good enough for 36th overall out of the 48 riders who made the cut of the 51 who took a qualifying shot for the day.  Like finishes of 12th in both his heat and semi races kept him out of the 18 rider National main event at the 4th half-mile event of the season.

Running a limited schedule in the '11 season, Cory scored a 16th place finish at round 8 in Hartford, MI. for his only National main appearance of the year, but not for want of trying.  This young man has the talent and the ability to mix it up, and with his plans for 2012 released the other day to include running the full schedule for the season should help him along to be better poised to make some more main events for the upcoming year.


Cory Texter and the RLT Racing team are excited for the 2012 season to start. After doing a limited schedule last year, Texter will be competing in the entire AMA Grand National Series this year. Texter had a very up and down 2011. He seems to think the inexperience in running his own program for this first time had a lot to do with it. “It was the first year we did everything by ourselves and the first year racing since our Dad passed away. We had some good days, but I got worn out really quick and I wasn’t having as much fun as I had hoped to. The budget got tight but we kept digging, and as a team, we finished out the season strong.”

This season, Texter is backed in both the singles and twins series. Englehart R&T will be backing Cory in the singles series for the 2012 season. Tom Englehart has a lot of knowledge and experience in dirttrack racing. He is supplying Cory with a stable of motorcycles and has been giving a lot of mental support to him as well. “I rode for Tom at a pro-am deal in Ohio this year and we worked very well together and had a lot of fun. He is one of the smartest guys I have ever met and for him to be helping me out means so much. We just started testing the bikes, but they have a lot of potential and having Tom there to work on them is just awesome.” Texter will also have the option of riding his own RLT Racing Honda as well.

Tom Englehart had this to say, “Englehart R&T is very proud to be supporting Cory and RLT Racing this season. Cory has a tremendous amount of enthusiasm and passion for life, and this comes through in his racing. Cory and I had some instant success this past fall, so it was an easy decision to provide support for his 2012 program. This season we are not going to be boxed in with any constraints, we are going to do what works and that means what works best for Cory. I am looking forward to building a very strong program with RLT Racing for the 2012 season.”

For the twins series, Texter is getting support from Dave Miller at Mad Hog Cycle in Pine Bluff, AR. Cory will ride the Mad Hog Cycle XR750 at select races and Dave will be housing the RLT Racing XR 750′s and fine tuning them throughout the season. Cory stated, “I rode for Dave at the Savannah race last month and I didn’t know what to expect. The bike was really fast and we just clicked. Dave has a lot of confidence in me and my abilities and we have set some goals for this season that I would have never thought were reachable until we started working together. He has already made the RLT Racing XR 750′s a lot better than they have been for a few years now and he has taken a lot of pressure off me by allowing me to just focus on racing.”

Dave Miller commented on being part of Cory’s program. “I am very pleased to be part of the team; Cory has shown himself to be a very dedicated professional with a deep passion for our sport. I will be doing everything I can to ensure he has a fast, reliable bike for the season. Cory will ride the Mad Hog Cycle XR 750 at all of the cushion tack events and I will prepare the RLT XR 750’s for the hard surface tracks. Cory has impressed me with his dedication to winning and we have been having fun preparing for the 2012 season.”

Shayna Texter will be contending the 2012 pro singles series. Her plans are still being sorted out, but RLT Racing will be there all season to help her achieve her goal of winning the 2012 Pro Singles Championship in any way they can. She finished off the 2011 year strong becoming the first female to win at the grand national stage in AMA history, and also backed it up with a 2nd place at the Calistoga round. Stay tuned for more information on Shayna and her new sponsors in coming weeks.

RLT Racing was started in 2010 by Cory & Shayna Texter. It is named after their father and biggest fan, Randy Lee Texter. He passed away in August, 2010. Randy was a past AMA Professional Dirttrack and Road Racer and was named the AMA Sportsman of the Year in 2010. The team is owned and operated by the brother/sister duo.


Englehart Research and Technology is located in Zanesville, Ohio. All motorcycles are Honda powered and exclusively use Durelle and J&M Racing Products along with RHC components.

You can keep up with Cory Texter and RLT Racing here via these sites.

And here is Cory's profile thanks to AMA Pro Flat Track: