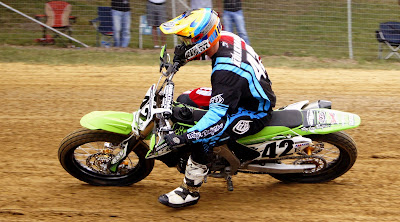 Kayl Kolkman muscles his #42E Kawasaki Simi Valley/MEH Corp/Troy Lee Designs/Barnett-sponsored KX450F during practice for round 14 of the 2011 AMA Pro Flat Track Harley-Davidson Insurance Grand National Championship Series at the Peoria TT on August 21.  The California resident missed the cut for the National main after qualifying 34th out of the 39 riders on hand, and 10th place finishes in his heat and semi race that kept him out of the 19 rider main event.  He did however qualify for both the Salinas TT and the Springfield Short Track to earn himself a full National number for the upcoming 2012 season, so he will be able to drop the 'E' from his number plate.

Kolkman started the 2012 season off strong by winning his heat and the Open Class 'A' Main over the weekend at the South Point Casino rounds of Gene Romero's West Coast Flat Track Series, taking home the win in round 1 on Friday the 13th over a field that consisted of both Halbert Brothers and Brad Baker out of Washington State, Mikey Rush, Brandan Bergen and '10 AMA Pro Flat Track Pro Singles Champion Jeff Carver. 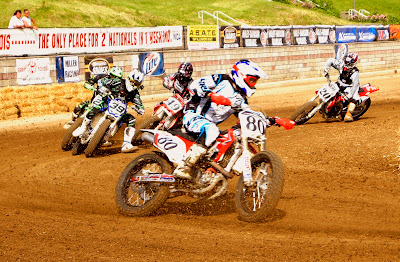 Steve Bonsey on the George Mack-prepped #80 MDR Racing/Alpinestars/Arai/Rod Lake-sponsored Honda CRF450R starts to clear out in front of a pack of riders during the National main event of round 7 of the 2011 AMA Pro Flat Track Harley-Davidson Insurance Grand National Championship Series at the Springfield TT in late May.  Bonsey sailed home to a 4th place finish on the day in only one of six National main appearances on the season while running a limited schedule.  Trying to keep the former AMA Pro Flat Track Rookie of the Year in sight are #49 Chad Cose, #28 Shaun Russell, #39 Matt Burton and #20 Matt Weidman.

Bonsey was another National number holder who made the trip to Las Vegas over the weekend to take part in the WCFTS rounds at the South Point Casino.  Riding a Dave Zanotti-prepped Zanotti Racing Honda CRF450R, Bonsey missed the main on Friday night after coming home 3rd in the Trophy Dash behind Sammy Halbert and Friday's 'A' main winner, Kayl Kolkman. 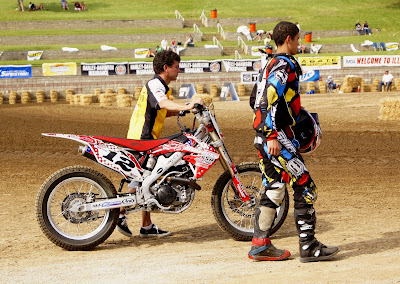 Brad Baker is shown just before rider intros at round 7 of the 2011 AMA Pro Flat Track Harley-Davidson Insurance Grand National Championship Series at the Springfield TT on May 30, as former National #23 Kevin Atherton rolls the soon-to-be Rookie of the Year's #12 EBC Brakes/Arai/CP Carillo-sponsored Honda CRF450R out to the starting line.  Baker would go on to bring home a 9th place finish on the day after a third row start.


Vintage Flat Tracker (VFT.org) posted some pictures from Friday and Saturday's rounds 1&2 at the South Point Casino in Las Vegas.  As of this posting on 1/16/12 they were right at the top of the page.  You may have to scroll down as time goes on to get to them, but they are marked clearly for this first round of events for the WCFTS 2012 season:

Miriam Deitcher who runs the Facebook Flat Track Live page, posted a few videos from the weekend's festivities at South Point in Vegas.  Check them out below on YouTube!

(Note-there are a few other videos that Miriam has posted from Vegas on YouTube that you can check out along the right side column.)

And you can keep up with what is going on in the world of flat track racing here via Miriam's Flat Track Live on Facebook:

And here is Gene's official site for the WCFTS: