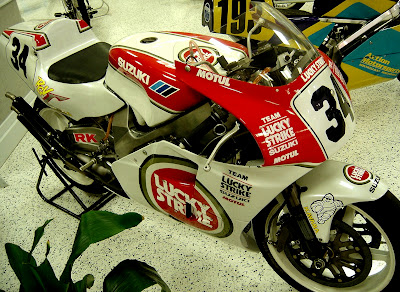 '93 500cc World Champion Kevin Schwantz' Lucky Strike Suzuki RGV500 sits on display inside the Indianapolis Motor Speedway Hall of Fame Museum in December 2009 on loan from the Texas resident.  The machine had been in storage in the champion's home state until before the 2nd Annual Indianapolis RedBull MotoGP round in August 2009, when Schwantz reportedly pulled it out of mothballs to have it restored to riding condition.

The former champ and current Schwantz Schools head man then had it on hand for the weekend's festivities at Indy in order to please the crowd with some 'demo' laps at the historic World Capital of Racing. After turning several laps on one of the greatest 2-stroke machines in World Championship history, the machine was cleaned up and put on display at the IMS Museum for several months in their motorcycle racing area display.

Schwantz will be hosting another weekend of his Schwantz Schools at Indy in August 2012, but several months before that he will be the guest of honor at Daytona in March '12 for the AMA Motorcycle Hall of Fame's fundraising breakfast.


PICKERINGTON, Ohio — The AMA Motorcycle Hall of Fame is pleased to announce that 1993 World Roadracing Champion Kevin Schwantz will be the featured guest at its annual Breakfast at Daytona fundraiser, set for the Friday of Bike Week, March 16, at the Daytona 500 Club in the infield of Daytona International Speedway.

Native Texan Schwantz, who was inducted into the Hall of Fame in 1999, rocketed to prominence as one of America’s best roadracers during the mid-1980s. By the end of the decade, Schwantz had moved to international competition in the 500cc Grand Prix World Championships.

He was a perennial top rider in that series and won the world championship in 1993. During his Grand Prix racing career, Schwantz racked up 25 500cc GP victories, putting him second all-time among American riders.

“Kevin Schwantz stands among America’s greatest motorcycle racers, and holds a special place in the hearts and memories of a generation of racing fans,” said Jeff Heininger, chairman of the American Motorcycle Heritage Foundation, which raises funds for the Hall of Fame.

“We’re honored that one of the Hall of Fame’s most decorated members is joining us at our annual Breakfast at Daytona fundraiser and will provide a first-hand perspective on his world-championship career, and the people and companies that he worked with along the way.”

Schwantz, who today runs the Schwantz School for performance motorcycle rider training at Indianapolis Motor Speedway and Road Atlanta, said he’s excited to share stories of his successful career — and take audience questions — at the AMA Motorcycle Hall of Fame Breakfast at Daytona.

“While today my focus is on creating better, safer riders through the Schwantz School, my passion has always been competition at the highest level,” Schwantz said. “The Motorcycle Hall of Fame is a great institution, and it will be great to revisit stories from the past with true enthusiasts at the AMA Motorcycle Hall of Fame Breakfast at Daytona on the infield of one of the world’s most famous racetracks.”

The Breakfast at Daytona also includes a silent auction of unique items related to the Hall of Fame, and an autograph session with Schwantz and other Motorcycle Hall of Famers.


About the American Motorcycle Heritage Foundation: