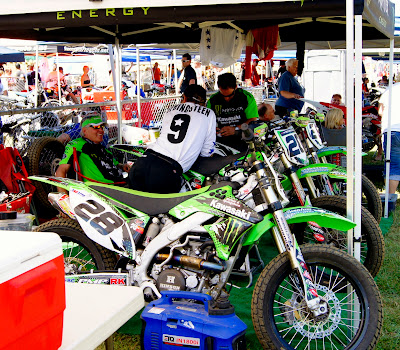 Team owners Bill Werner and Jay Springsteen talk with rider Shaun Russell during a break in the on-track action at the Peoria TT on August 21 during round 14 of the 2011 AMA Pro Flat Track Harley-Davidson Insurance Grand National Championship Series.  Russell had a trio of Werner Springsteen/Monster Energy Kawasaki/Wossner Pistons/Motion Pro-sponsored KX450Fs to choose from for the day, and made the best of what the 13-time AMA Grand National Championship winning tuner had to offer by qualifying 23rd out of the 39 riders that showed up to race at the iconic facility.

Russell would go on to finish 5th in his heat, making him have to race his way into the National main out of the semi, where he finished a very close 3rd behind winner Aaron King and runner-up Brad Baker, and would end the day with a hard fought 11th place finish in the final event of the day at the Peoria Motorcycle Club-sponsored race.

2011 AMA Pro Flat Track Saddlemen Rookie of the Year Baker reported early today that he was flying out of Portland heading to Wisconsin to contend Sunday's 3 Hour Steel Shoe Fund Ice Race aboard Werner-prepared Kawasakis for the Wisconsin event.

And in what is being reported as the worst-kept secret in AMA Pro Flat Track, Baker's tuner for the 2012 season, Kenny Tolbert, will be on-hand to take in the event as well.  So, does this mean the rumors have been true, that Baker will race Kawasakis for Tolbert in the 2012 season?  This is big news if that is the case, so stay tuned as the 2012 flat track season begins to unwind and The Bullet hits the track this weekend for his first time racing on ice. 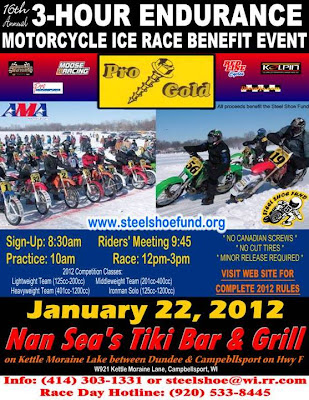 You can find out more about this Sunday's 3 Hour Steel Shoe Fund Ice Race in Campbellsport, WI. here via their official site: