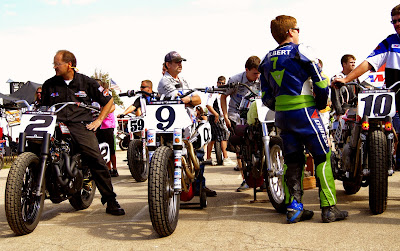 Riders and team members gather in the pit area along with their machines for the start of the National main event at round 16 of the 2011 AMA Pro Flat Track Harley-Davidson Insurance Grand National Championship presented by Motorcycle-Superstore.com Series at the Springfield Mile II on September 4.  With three heat races and two semi races in the books, 18 riders have qualified for what is considered the biggest race on the calendar in the AMA Grand National Championship at the Illinois State Fairgrounds mile oval.

With just minutes to go before the stars of The Rolling Thunder Show line them up to do battle at over 130 mph, Kenny Coolbeth, Jr.'s #2 Harley-Davidson Motor Co/Screamin' Eagle/Spectro Oils/Fox-sponsored factory H-D XR750 sits at the ready with one of the team members, along with Jared Mees' #9 Rogers Lake Racing/Blue Springs/Screamin' Eagle/Lucas Oil-backed XR.  Sammy Halbert's #7 Kings Kustoms/White's H-D/LZ Racing/KK Supply-sponsored XR sits as his team adds the finishing touches, while Slammin' Sammy talks with one of Johnny Lewis' #10 Scott Powersports/Dubach Racing Developments/Saddlemen/Triple J Racing-sponsored Kawasaki team members.

Also seen in this shot are eventual event winner Willie McCoy's #59 H-D of Wausau XR (left rear of shot) and Matt Weidman #20 who can be seen between Halbert and Lewis' machine in the background.


While the first Twins Series event is still almost four months away (May 27 at the Springfield Mile I), the announcement today that Harley-Davidson Insurance will be returning to the 2012 AMA Grand National Championship Series as the title sponsor for the 19 race season is great news for the sport.  And as they did last year, the H-D Insurance group will also be kicking in $100K for the year-end championship payout.

But you don't have to wait until May to see the great racing in The Rolling Thunder Show, as the season kicks off in Daytona Beach on March 15-16 with rounds 1 & 2 in the 2012 AMA Pro Flat Track Harley-Davidson Insurance Grand National Championship presented by Motorcycle-Superstore.com Series.  The official kick off to the season is a double header round of some great Singles Series action at the new Daytona Short Track.