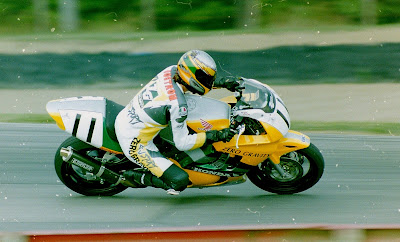 Ben Bostrom on the #11 Zero Gravity/Dunlop/AGV/Kerker-sponsored Honda CBR600F3 is shown during a practice session of the AMA Pro Road Racing 600 Supersport Series at the Mid Ohio Sports Car Course in July '97.  The Honda Super Cycle Weekend presented by Dunlop Tire event saw BBoz back on the Zero Gravity Honda team for the second year in the 600 class, and doing double duty in the AMA Superbike Championship Series on the team's RC45.

Bostrom would go on to become the '98 AMA Superbike Champion after moving up to the American Honda factory team for the '98 season as a team mate to Miguel Duhamel, and he would win the '08 AMA Supersport Championship and the '09 Daytona 200 while riding for the Graves Yamaha team.


Bostrom will be back with the Michael Jordan Motorsports team for the 2012 season in his second season riding for the team, and will be aboard the Jordan Brand's iconic #23 machine in the AMA Superbike Championship.  As best as I can recall, the elder of the Boz Bros will be the only rider racing in the AMA Pro Road Racing Series that raced on the Homestead-Miami course when the series last visited the speedway in south Florida during the '96 season.  AMA Pro Road Racing has set their tests dates for the upcoming 2012 return to Homestead and the newly-added and brand new facility in New Orleans, LA.

DAYTONA BEACH, Fla. (January 24, 2012) - AMA Pro Racing officials announced today the dates for the official AMA Pro Road Racing tests at Homestead-Miami Speedway and NOLA Motorsports Park. In advance of the Big Kahuna Miami (September 21 - 23, 2012), the Series' first return to Homestead Fla.'s Homestead-Miami Speedway since 1996, AMA Pro Road Racing riders will get a chance to shake down their machines on March 20 and 21, 2012.
Avondale, La.'s NOLA Motorsports Park is America's newest racetrack, and before heading there for the Big Kahuna New Orleans (October 5 - 7, 2012) AMA Pro Road Racing will get the chance to put down some of the first rubber on the road course at the official series test, scheduled for June 26 and 27, 2012.
The two-day tests will include track time from 8:00 a.m. to 6:00 p.m. with a 60-minute lunch break, media availability and will be staffed by AMA Pro Racing competition and timing & scoring personnel. In an effort to keep travel and transportation expenses to a minimum, each test has been scheduled for the Tuesday and Wednesday following an AMA Pro Road Racing event in the same region.
The test at Homestead-Miami Speedway will take place just after the season-opening event at Daytona International Speedway, which will be held on March 15 - 17, 2012 as part of the historic Daytona 200 Week. Testing at NOLA Motorsports Park is scheduled following the June 22 - 24, 2012 event at Barber Motorsports Park, which is located roughly 400 miles away in Birmingham, Ala. Additional details about the NOLA Motorsports Park test will be released via competition bulletins in the coming months.
In order to participate in either test, riders must have a valid 2012 AMA Pro Road Racing competition license and be pre-entered in the 2012 race event scheduled at the respective track. Entry forms and competition bulletins detailing each test will be available in the competition section of AMA Pro Racing's website.

Tickets for the Big Kahuna Miami at Homestead-Miami Speedway and the Big Kahuna New Orleans at NOLA Motorsports Park can be purchased at http://www.m1powersports.com/.