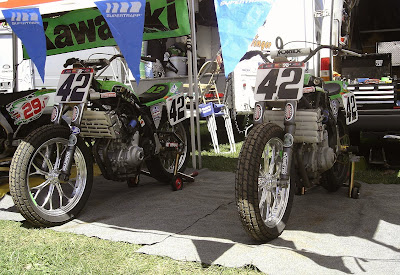 Bryan Smith's #42 Werner Springsteen Monster Energy Kawasakis sit in the pit area at the Springfield Mile during a break between practice and qualifying on Sunday, September 5th. Smith had just won the Lucas Oil Indy Mile in round 12 on the Indiana State Fairgrounds mile oval some eight days earlier, and within a few hours would win the Labor Day Weekend running of the Springfield Mile, round 14 of the 2010 AMA Pro Flat Track K&N Filters presented by Motorcycle Superstore.com Grand National Championship Series.
With the rain-out in Knoxville, and Smith's 6th place finish at Minnesota, coupled with Johnny Lewis' 8th place on the Scott Powersports' Kawasaki, Kawasaki has clinched the manufacturers title in AMA Pro Flat Track for the 2010 season. Henry Wiles' wins on the Monster Energy Kawasaki 450 in the Singles class helped some too! It's the first time since the '90s anyone but Harley has been able to accomplish that. Which in AMA Flat Track is saying a lot!
It's still hard to fathom Bill Werner (or Jay Springsteen, for that matter) NOT being affiliated with Harley-Davidson after all these years-and decades. But as with all of his projects and work in AMA Flat Track, he has developed an extremely high quality package that is also extremely lethal on the mile tracks. Add to that the lesser costs involved to set up a contending machine in the series, and Bill Werner has given back to the sport, again, in spades. As I have been saying all year with the bike and team in general, once they get things figured out on the half-mile tracks, the competition better look out. And I have a feeling, like with all things involving Bill Werner, that that won't be too long to happen. At least by then, the competition won't be looking over their proverbial shoulders any more. They'll be watching the #42 walking away from them. The 2011 AMA Pro Flat Track season can't get here fast enough, and we still have the Budweiser Mile in Arizona on October 9th to finish this season out.
-------------------------------------------------------------------------------------------------

The 2010 AMA Pro Flat Track season has been one of change and one of diversity, with the Werner Springsteen Monster Energy Kawasaki, ridden by National #42 Bryan Smith being right at the top in both categories. With a Bill Werner-inspired and built machine that has also had help in the development department by 3-Time Grand National Champion Jay Springsteen, Bryan Smith has topped the podium at two of the series premier events this year with a series-new lethal mile winning machine.

After coming together in the '09 off-season, the Werner Springsteen Kawasaki camp showed some pretty bright shines of light in the early part of the 2010 season, only to fall just short--or out--of the picture due to teething problems incurred with putting a new machine on the track.
And in a series that for the most part, hadn't seen too much in the way of 'new' since the Big H dropped out in the late '80s and went away entirely in the mid-late '90s. Throw into the mix that Joe Kopp took the #3 Latus/Lloyd Bros. Ducati to the win at Arizona in May, and suddenly you are seeing some pretty big changes in AMA Flat Track. Fast forward to Indy at the end of August and Smith puts the Lean Green Mean Machine on the TOP of the podium at one of THE premier stops on the series calendar, and then turns around and does it again eight days later at Springfield, long one of the series (and H-D's) premier stomping grounds. These wins, along with Henry Wiles' wins in the Singles class this year also helped bring Kawasaki the manufacturers championship for the 2010 AMA Flat Track season. Something that no one other than H-D has done since the '90s.

With one round left to go in the season, Prescott Valley's hosting of the Budweiser Mile on October 9th will be the last chance this year for Bryan Smith and the Werner Springsteen
Monster Energy Kawasaki team to put it on top for the season. And then next year can't get here quick enough for this AMA Flat Track fan!


Here's Mark's interview with the rider of the #42 machine, Bryan Smith:

And here is part one of Mark's interview with Bill Werner:

And here is Stu's Shots first story with links from a couple of weeks ago on the Werner Springsteen Monster Energy Kawasaki:

FYI--Stu's Shots made the video at the 21 and 39 second markers into the video. I'm in the neon AMA vest walking along the lower and right side of the shot when the camera pans from the AMA tent to over at the Lloyd Brothers set up in the pit area. My 15 minutes are up, by the way......

And an AMA Flat Track fan that goes by the name of 'teachertwig' on YouTube put this short video up of the first two laps of the main at the Springfield Mile. It's short, but it's worth the look:

And last, but definitely not least, Will and Yve take the shots, videos and run the great site over at TheFastandDirty.com and put this video together for their site and for Monster Energy of the Springfield Mile. Great stuff here now: