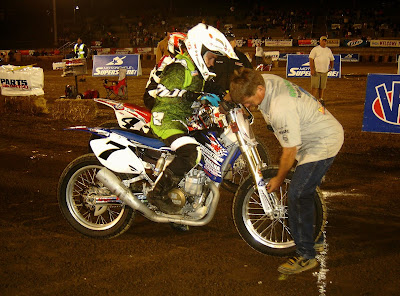 In what can only be viewed as a very critical turning point in the AMA Pro Flat Track Grand National Championship Series, AMA Pro Flat Track has suspended current-3rd in the overall points standings man, Sammy Halbert, National #7 and the winner of the season opening round at the new Daytona Short Track, for the next round in the series. After having been on probation since the May Springfield round, Halbert's ride in last Saturday's Springfield Short Track semi race was considered pretty sketchy when he made contact with another rider in the process of coming through the field.

I personally did not see this move as I was following other riders on the track when this incident occurred. And I don't much like to quantify this type of incident in order to taint any decision that was made by those involved in either direction. JMHO.

You can read the full story by Larry Lawrence at his always fine site TheRiderFiles.com and see what Sammy and AMA Pro Flat Track Manager Mike Kidd have to say after this breaking news was announced. With the upcoming round in Shakopee, MN. at the Canterbury Park mile oval, barring any inclement weather, this would be the round he would have to sit out.

Here's the breaking news thanks to Larry: