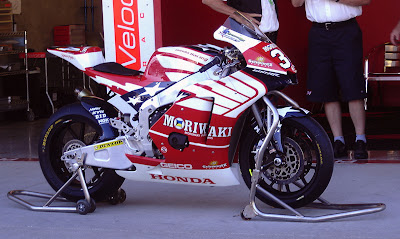 Roger Lee Hayden's #34 American Honda/Moriwaki/DID/Schwantz Schools/Ride For Kids Moto2 ride sits outside the garage area at the Indianapolis Motor Speedway during the 3rd Annual Red Bull Indianapolis MotoGP Weekend. Even with the sources behind American Honda, Kevin Schwantz and Moriwaki Engineering the team couldn't overcome the one thing that would all but be the team's undoing--a big 2nd turn crash on the start.
But almost from the time the weekend started, the team started experiencing trouble and lost almost 30 minutes of valuable track time in just the first practice session alone, and even by the time the final qualifying session was run on Saturday afternoon, Roger was only able to qualify in the 29th position out of the 39 rider field. After repairing the damage caused in the aforementioned 2nd turn crash in the Moto2 main event, Roger was finally able cleared to go back out, finishing the weekend sans rear brakes in the 17th spot, 31.860 seconds down on eventual winner and points leader Toni Elias.
But neither the team nor the rider have anything to be ashamed of, especially in lieu of going up a 39 rider field where most of the riders had been racing this class for nine other events in the season. Let alone the track time lost. And even to be fair the two days of testing the week before when American Honda rented IMS for $30K for Roger to get used to the track (and the bike) WAS great for learning the track but in no means got them ready for the bomb that would ensue at the start of the race. And all in all what they DID overcome in this experience was pretty darn good. Hopefully American Honda will use it as a launching pad to get back into some sort of action again in racing. And that they keep Schwantz involved to oversee things, get Roger some serious seat time and go for it. Now that would be cool.
-------------------------------------------------------------------------------------------------

Chris Ulrich does a nice little 'ride up' and write up on the American Honda/Moriwaki Engineering Moto2 effort put together with Kevin Schwantz and Roger Lee Hayden for the Indy MotoGP round last month. While doing some journalistic reviews for RoadRacingWorld he got a chance to take some laps on the #34 at IMS the day after the Moto2 race. Check it out: