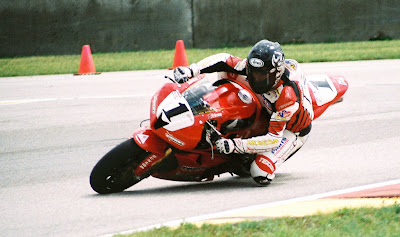 Hayes is also set to return to Graves Yamaha at least through the 2012 season after announcing last week he had re-upped with the team. Hayes brings the AMA Superbike Championship to Yamaha in only it's second premier class title since the series inception in the mid '70s, and it's first since '91 when Thomas Stevens took it all for Vance and Hines Yamaha. It will be great to see another competitor, let alone another one of the nice guys, come back for the following year's racing and being able to wear and represent the #1 plate, especially after such a stellar year.

To think there were only five races he didn't finish in the top three this season is a phenomenal achievement for any racer in any racing series. And with the AMA Superbike Championship's newer class structure and rules in place, the racing has really tightened up in the class as a whole. With no more fire breathing dragons to rack up mega dollars in development and maintenance costs, the series has been very competitive as a result. Six different riders won races this year, and on three different makes (Yamaha, Suzuki, Ducati). And word has had it since the first of the year that the teams and riders are happy with the newer direction that AMA Pro Road Racing has taken in the 2010 season after moving iron-fisted and jawed Roger E. out the door to make way for more reasonable efforts to run a professional racing series. And that's a great thing.

Congrats go out to Josh Hayes for winning the 2010 AMA Superbike Championship and for such a fine year. It's great to see a guy like Josh get this thing after trying so hard for so long to get into the premier class and finally obtaining his dreams. Bravo Dude!

Henny Ray Abrams has the story of the weekend's AMA Superbike races at Barber Motorsports Park from over the weekend over at Cycle News.com:

Here are the results of race one for the AMA Superbike Series at Barber on Saturday from AMA Road Racing:

And here are the results from race two, where Josh Hayes clinched the 2010 AMA Superbike Championship with a fine run home into 7th place: