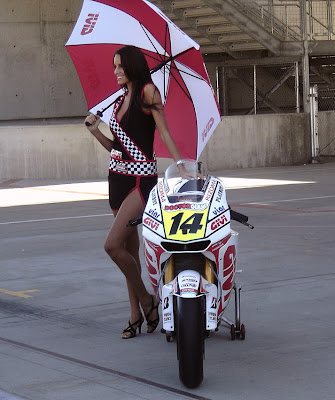 The LCR Honda umbrella girl shows off the team's RC212V just outside the MotoGP garages at IMS in August of 2010. Team rider Randy DePuniet broke his left leg back in July at the German Sachsenring round and amazingly was back in action at the Czech Republic round in less than a month. He now sits 8th in the overall MotoGP 2010 World Championship Standings. DePuniet was also one of the more vocal riders in the series that criticized the track during the Red Bull MotoGP Indianapolis round not only because of the different sealers used in the various pavements hemmed together at IMS but also due to the bumpy nature of the course in many areas. And the fact that the track has so many left turns didn't help Randy D much, either.
The team has been with Honda for several years now and has a good record of posting decent results in the premier road racing series in the world thanks to direct involvement and help from HRC in Japan. And they have always sported some of the cleanest looking equipment on the grid as well. Not to mention the grid girls........
-------------------------------------------------------------------------------------------------

The Twin Ring Motegi stop of the MotoGP World Championship in 2010 is finally going to run this weekend after having to be re-scheduled due to the Icelandic volcano some five months ago. With the series winding down, the next three rounds will be back-to-backs and will be the first of five final events on the 2010 calendar. And now would be the time for Repsol Honda's Dani Pedrosa to stay on his current run of winning and finishing on the podium if he has any hopes of catching points leader Jorge Lorenzo on the Fiat Yamaha. Of course, with a 56 point lead over Dani in the standings to go along with his 7 wins and 12 podiums in 13 races, the chances of un-seating Jorge with only five rounds to go in the season are pretty slim. Of course anything can happen in racing, but don't look for it and I don't see it happening at this point with as dominant as Jorge has been this year. He's only been off the podium once this season.

The best of the rest to watch this coming weekend would be the improved results both Marlboro Ducati teamsters Casey Stoner and Nicky Hayden have had in the last round at Aragon. Stoner winning Aragon for his first win of the season, and The Kentucky Kid getting the big Duc on the podium for the first time since Indy in 2009 should help to ring in more consistency for the pair in the final five of '10. Team Monster Energy's Ben Spies will be looking to improve even more on his spectacular rookie season in the class, and Colin Edwards will be looking to steer the beast that has been the 2010 season around before the end of the year. Pedrosa's team mate Andrea Dovizioso is hoping to keep his place on the mantle in the Repsol Honda garage as well as his 5th place in the overall standings. With Stoner jumping over to the HRC team in 2011, Dovi has been the odd-man out as of late, even though he has had some solid results. No official word has been uttered as to whether he remains with HRC directly for 2011 or goes to one of the direct satellite teams. At one point the top Honda guru's were to have said they would run a three-rider team if necessary. We'll see about that one, too.

Team Rizla Suzuki will be back in full form-for what that is worth-in Japan this weekend with Loris Capirossi and team mate Alvaro Bautista (after having missed the Aragon round due to an injured finger). But talk is all over the net about the problems Suzuki has from within and how or if they will be able to continue fielding machines on the grid in the upcoming season. And their problems aren't just in MotoGP but also in WSBK as well. Seems like the only place they can turn a wheel right as of late is in AMA Superbike.

You can follow the weekend's events here on the official site of MotoGP:

And here is the FIM press release, thanks to UltimateMotorcycling.com, on the Twin Ring round at Motegi, Japan:

Here's the official point standings after 13 of 18 rounds in the 2010 MotoGP World Championship: