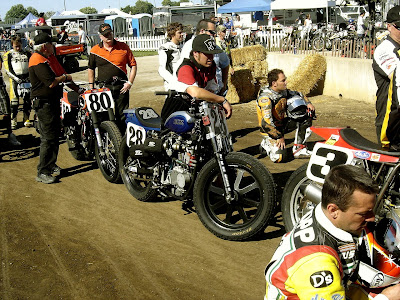 With the party just getting ready to get started for the main event of the AMA Pro Flat Track Springfield Mile Labor Day weekend edition, the bikes are rolled out onto the track for rider and sponsor intros. The crowd goes crazy as 19 of the fastest men in the world in the Grand National Championship Series is introduced, and immediately EVERYONE knows whose favorite is who.
In this shot (L-R) are Logan Myers #24 in front of his Motorcyclists Post/Mad Dog/Burn Rite-backed XR (not pictured). Myers came out of semi 2 to finish third to Joe Kopp and Steve Bonsey and finished 16th on the mile after 22 of 25 laps. Steve Bonsey #80 can be seen next to his Johnny Goad/Alpinestars/Arai/Dodge Bros-sponsored XR. Steve came home 10th in the main after coming out of semi 2, and also had a good run to sixth in Saturday night's short track event.
Next up is Shaun Russell #28 kneeling alongside his GCR Racing/Fox Valley Cycles/Motion Pro/Arai-sponsored XR and crew. Shaun came out on top in semi 1 over Brandon Robinson #44 and Rob Pearson #27 to earn his transfer to the main, and came hime in 13th. He missed the prior night's short track.
And finally Smokin Joe Kopp #3, the series overall points leader going into and after the Springfield weekend, works on his visor while kneeling next to his Latus H-D/Lloyd Bros/
American Agip/MotoConcepts-sponsored Ducati. After having to win semi 2 to make the main, the 2000 Grand National Champion lost the draft in the main and led the second group of riders home in the 7th spot, 13.730 seconds back of winner Bryan Smith. Joe also finished 4th at the short track the night before, and now holds a 252-242 slim advantage in the overall points over runner up point man Jake Johnson with three rounds left in the season.
------------------------------------------------------------------------------------------------- 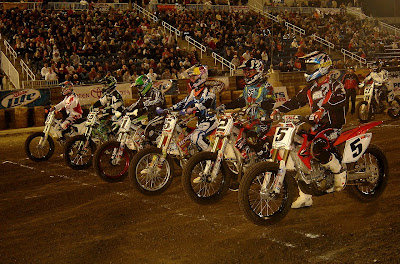 It's go time for the main event of the AMA Pro Flat Track K&N Filters presented by Motorcycle Superstore.com Series round 13 at the Springfield Arena Short Track event, and row 2 is poised to get the best jump they can to catch the five men in front of them (heat 1 winner Chris Carr was forced to start at the rear due to his primary mount failing to fire before the main) for a share of the race action, and hopefully, the podium as well. The crowd in the stands jumps to there feet and stays there as the light goes green and 19 of the fastest short trackers in the nation go bar-to-bar and wheel-to-wheel for a 25 lap bullring run.
(From L-R): Steve Bonsey on the #80 Bob Weirbach/Alpinestar/Arai/Oakley-sponsored Honda had a strong run in Saturday night's event, coming home 6th, and rounded out the weekend after running 10th in Sunday's mile event. The week before the first-time GNC winner from the July Calistoga event was handed the checkered flag signed by all of the riders from his initial win. He left Springfield with 60 points total, good for 13th in the overall standings.
Bryan Smith on the #42 Werner Springsteen/Monster Energy/Wossner Pistons/SuperTrapp-backed Kawasaki raced to 4th in his heat to transfer to the main, and brought it home in the 8th spot. If you don't already know what he did on Sunday, keep reading........
Jared Mees sits ready to go on the #21 Rockysonline.com/Lucas Oil/Rogers Lake/
Montgomeryville Cycles-sponsored Honda, and the defending Twins Champ had a good run on the short track out of 4th in heat 3 to finish the evening in the 9th position at the bull ring. Sunday on the mile he rounded out the podium on his #1 Twins machine in the 3rd-place spot and now heads into the final three Twins events of the season in the fourth spot in the championship standings with 228 points. He is tied with Sammy Halbert, but since #7 won the opening round at the Daytona Short Track, he holds the tie breaker for the 3rd spot in the championship hunt.
J.D. Beach #95C made his first (and second on Sunday at the mile) start in an AMA Pro Flat Track Expert Main Event after winning the previous two weekend's Pro Singles events at Indy and Peoria. In a great start to his AMA Flat Track career, should he stick around and not take up road racing as a full-time gig, he brought his Red Bull/Top 1 Oil/Rockwall Perf/Craig Rogers-backed Honda home in the 3rd place spot and final step on the podium in his maiden voyage, and then on Sunday transfered directly to the mile in his second Expert main event to bring his XR home in the 12th spot.
Kenny Coolbeth, Jr. on the #2 Bettencourts Honda/Jason Perry/Arai/Fox-sponsored Honda finished 3rd in heat 3 to transfer to the short track main, and came home in the 7th spot. On the mile on Sunday he brought his H-D Motor Corp/Screamin Eagle XR home 5th, and now sits a solid 6th in the overall standings with 207 points.
Jake Johnson on the #5 Zanotti Racing/Leo Vince/Arai/Tucker Rocky Honda had what was one of another strong runs of great weekends. He finished 2nd in heat 2 at the short track to heat
winner and second fastest qualifier Chad Cose, and then proceeded to try his best to keep main event winner Henry Wiles in sight for the 25 lap short track main. He ended up 2nd, 5.279 seconds short of victory. On Sunday, after crashing in the Dash for Cash, Jersey Jake brought his Zanotti XR from the back row in the 19th spot to finish on the end of the lead pack in 6th spot, .265 seconds back from winner Bryan Smith. The former 2-Time Singles Champ will head to Minnesota for Saturday night's mile event in the second spot in the overall standings, 10 points back of leader Joe Kopp. JJ has slowly but surely not only kept within sight of the front in the points, but has crept into what can now be considered striking distance of Smokin Joe for the 2010 AMA Pro Flat Track Grand National Championship lead and title. With his win at the second round at Daytona on the short track to go along with his spring win on the mile at Springfield, he could very well be in the best position to win the overall title.
------------------------------------------------------------------------------------------------- 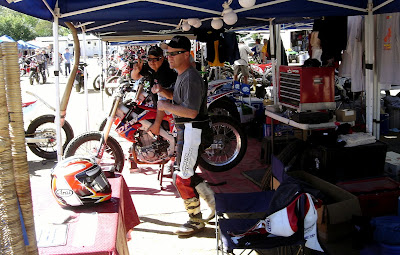 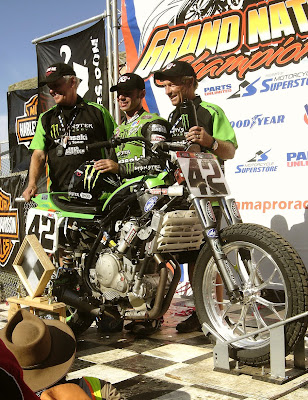 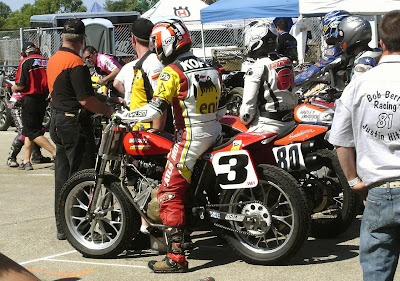 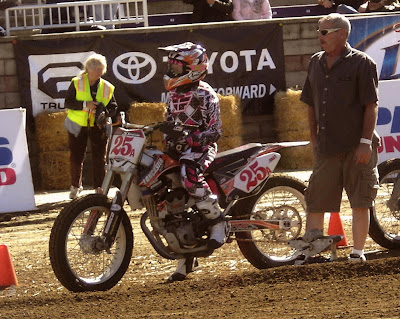 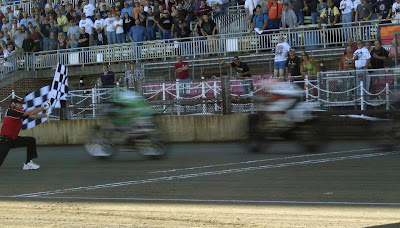 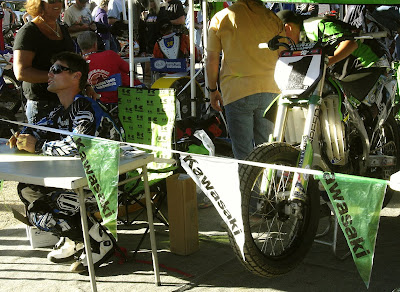 Henry Wiles sits in the pits and talks with the spectators while his #1 Monster Energy/Jones Bros/Shift Racing/Don's Kawasaki-backed Kawasaki sits next to him. Henry had a near perfect evening on the short track by winning the fastest heat 3 over Joe Kopp, Kenny Coolbeth, Jr., and Jared Mees, then ran away with the Dash for Cash, clinching his second #1 plate in the Singles Series in a row and being honored with the #1 plate from AMA Flat Track Manager and '81 Grand National Champion Mike Kidd on the podium. He then went on to win his 7th event in a row at the Springfield Arena ('07-'10 Short Track Winner, '08-'10 TT Winner) and 13th Singles event in the State of Illinois (6-straight wins on the Peoria TT dating back to '04 as the '07 Peoria event was rained out) overall. His only downfall for the evening, if you could call it that, is he qualified 3rd overall out of the 72 riders (and 48 who qualified for Springfield) who timed in for the Expert Singles event.
Henry took his #17 Atkins Bros/KK Motorcycle Supply/Don Kissinger Racing/Saddlemen-backed XR to a fourth place in heat 1 on Sunday to a direct transfer to the main, and brought it home in the second pack of riders to an 11th place finish. He now sits in the 5th spot in the overall standings with 224 points after missing the Twins event at Indy the weekend before. If this young man ever gets his Twins program on the same roll as his Singles program, the competion doesn't stand a chance.
------------------------------------------------------------------------------------------------- 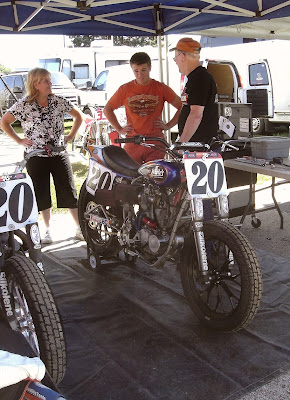 -------------------------------------------------------------------------------------------------
Matt Weidman talks in the pits on Sunday morning with his Mom, Rachel and legendary tuner Carl Patrick while his #20 White's H-D/SNIP/Silkolene/Shoei/Carl Patrick XR sits in front of them before final practice and qualifying for the Labor Day weekend edition of the 2010 Springfield Mile. Matt's primary and family-owned and run mount sit on the left.
I got a chance to talk with this team over the weekend, and with the family support and the flashes of greatness this team has had, they are a true privateer team that is a sheer joy to be around and watch. Matt has had an up-and-down year, with his highlight most likely being the great 3rd place run and first podium in the GNC Expert class that this young man has had.
Suffering from twin mechanical failures on the mile Sunday, Carl's XR went south on them in practice and then while running in the 1st semi, the Weidman's primary bike also started making some terminal noise just before the flag, resulting in a 17th place and no transfer to the main. The night before, Matt had a super run going at the short track after getting 2nd to heat 1 winner Chris Carr, got a fine front-row start in the main to have a couple of near-off track excursions derail his run to the front. He ended up 10th after a great showing although the results were definitely not what the team had hoped.
Keep your head and chin up, Matt, and don't give up. Of course, four major mechanicals in one year, let alone two in one day's event will have a tendency to slow someone's charge. But when this team does get all the dominoes lined up, the rest of the field better watch out as the '08 AMA Flat Track Rookie of the Year knows how to keep it at the front once it all stays together! And when it does, he'll ride it like a cat with a fire on it's tail. He still sits 10th in the overall GNC standings with 91 points, and it sounds like he might have an interesting ride coming up on the remaining two mile tracks on the BMW that he rode originally in Arizona in May. Hopefully, that one stays together...literally and figuratively.
------------------------------------------------------------------------------------------------- 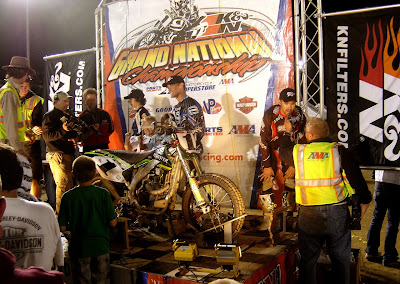 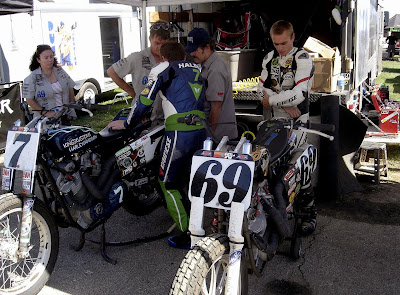 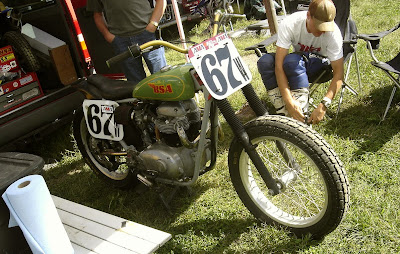