You Can Own Aaron Yates' Michael Jordan Motorsports AMA Superbike That Sat On the Pole at Daytona: No Joke, and At a Pretty Fair Price as Well 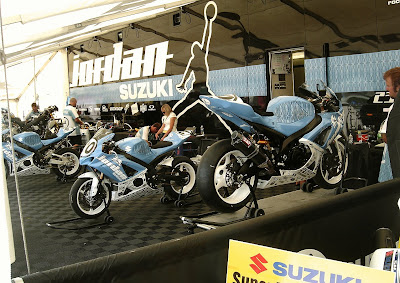 Gemini Racing out of Wisconsin is responsible for building the AMA Superbikes for the Michael Jordan Motorsports AMA Road Racing Series program, and is offering up the '2010' models after the year-end event at Barber Motorsports Park, in Leeds, AL., after the September 24-26th weekend. Of course, due to the economy, Suzuki supposedly didn't import any 2010 models for this year and was going to sell-off the remaining stock of 2009 units. Same was to have been said and done for the AMA Superbike Series, they were to have used the 2009 models as the homologation units required for the class this season. Just sayin since these ARE being advertised as of this writing as '2010' models. They of course could be meaning and be saying for the '2010' season-spec machines, which per the AMA rules SHOULD be 2009 models.

That being said, some real sweet AMA Superbike machines are going to be up for the person, or persons, who walk in and plunk down the necessary funds-advertised to be in the $14-20K range-which would depend on what configuration you want when you go to pick them up. These are the same bikes that Aaron Yates put on the pole in the season opening round at Daytona and also carded two fourth-place finishes with back in March at the World Center of Racing, finishing only .292 seconds behind team mate and winner Jake Zemke in race one, and .212 seconds behind him again in the second race of the doubleheader round.

Unfortunately, Aaron's season ultimately came to a premature end at the Fontana round a couple of weeks later due to a severe leg break suffered in a morning warm-up session. As a result, Canadian sensation and '09 Canadian Superbike runner-up Brett McCormick was drafted to fill the open seat for the team, and has progressed quite nicely through the season to a best finish of fourth place in race two at VIR back in August.