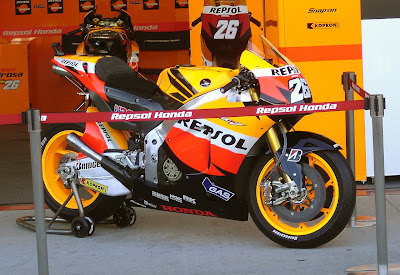 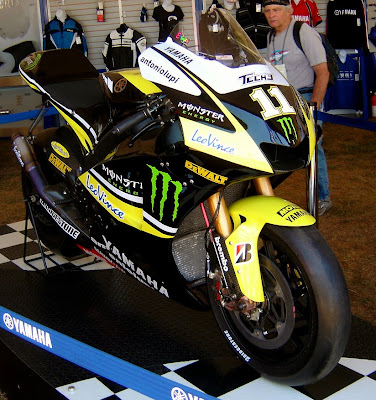 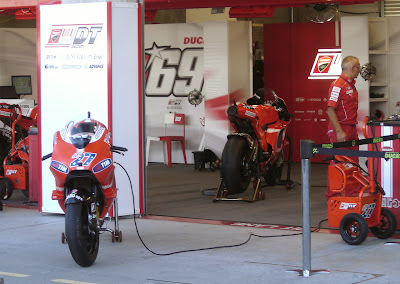 The Team Marlboro Ducati Desmosedici GP10's of Casey Stoner #27 and Nicky Hayden #69 sit in and out of the garages in preperation for the 3rd Annual Red Bull Indy MotoGP event, the 11th round of the 2010 MotoGP season. Stoner, the '07 MotoGP World Champion, had an awful weekend, crashing in practice as well as out of the final event on Sunday afternoon. He's surely at the point the way his season has gone that he is looking to 2011 with the move to Honda.
The Kentucky Kid had a much better all-around weekend, although his final result of 6th place Sunday afternoon was not what he, the team or even the fans wanted. After qualifying third and starting on the front row, Nicky was just getting into race rhythm when his left knee got snagged on the track, tearing the velcro and puck off of his leathers and wearing a hole in his leathers as well, effectively ending any type of real charge to the front.
But good things did indeed happen over the weekend as Nicky was the Grand Marshall at the Lucas Oil Indy Mile running of the AMA Pro Flat Track K&N Filters Grand National Championship. It was announced at Indy, officially, that Nicky has been resigned to the Ducati team for not only 2011, but 2012 as well. And then #69 jumped on a Lloyd Brothers Ducati 1098 (that had been set-up with a special '#69' number plate with stars and stripes) and proceeded to run off a couple of laps the reported 'low 39s' that would have qualified him around 8th or 9th in the Expert Twins race. And then he told the crowd it had been since 2002 he had even been on a real dirt tracker at a real dirt track ("....other than Earl's Lane...." back home.) Oh, and he did mention after wowing the crowd that he WOULD be back to flat track one day. Very cool.
------------------------------------------------------------------------------------------------ 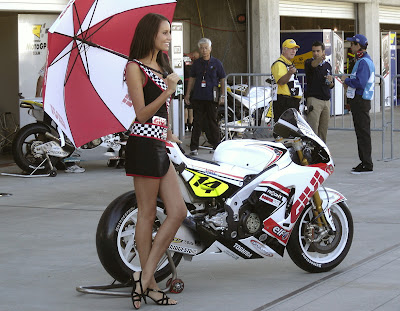 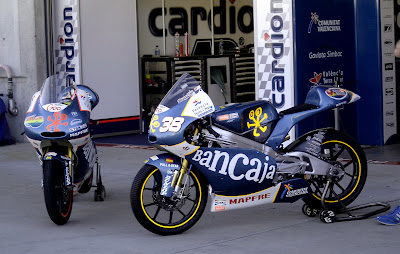 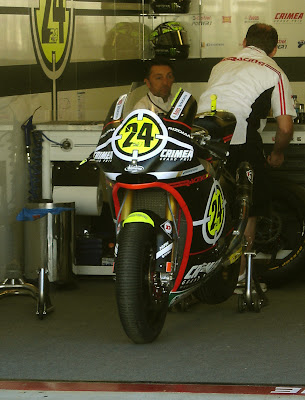 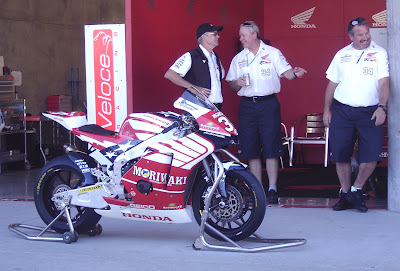 Roger Lee Hayden's #34 American Honda/Erion Racing/Moriwaki Engineering Indy wild card Moto2 machine sits in the pitlane as the Kevin Schwantz-led Erion crew discuss the weekend to come. Little did they know that with the massive effort put forth that 17th place on the weekend would be the result. Although for the way the race started, with Roger one of the eight involved in the initial turn two melee, that finish probably isn't too bad. Not only did he take a nasty fall, but his head was run over as well (and ruining what was one of the nicest special event helmets ever seen!) and the bike was left in pieces. After scrambling to get it together, the team wasn't even sure they were going to be allowed to restart at all, and once the dust (and confusion) cleared, RLH was able to bring it home. Down on the weekend from the start, they were never able to capitalize the way that they, and the fans, had hoped. But team manager and '93 500CC World Champion Kevin Schwantz told SuperBikePlanet.com that they are 'very hopeful' to put together a full time team for an assault on the 2011 Moto2 World Championship, with an American rider.
A very special shout out and congratulations goes out to the other American rider who was given a wild card entry into the Indianapolis Moto2 round. Former AMA Road Racing competitor Jason DiSalvo took a Team GP Tech FTR machine from the 26th qualifying spot all the way through the woods and on to Grandmother's house to a fine ninth place finish. Staying out of trouble on both starts and working his way through the field, Jason put on some great racing in making passes where he was strongest on the track. The SpeedTV crew covering the race said there was a good chance he may be invited to finish the season for the team, but I have heard no more on that statement. He should be, though, as Jason rode like a champ and was obviously in fine form on Sunday.
------------------------------------------------------------------------------------------------- 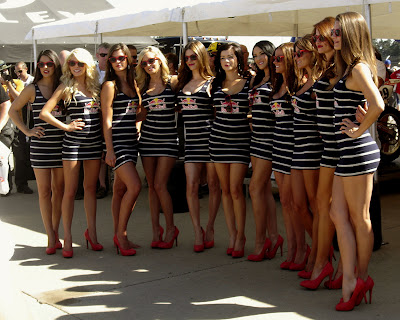 The lovely Red Bull girls smile for the cameras in the Gasoline Alley garage area at the Indianapolis Motor Speedway. With the world economy still suffering, the vendor and crowd count were down for the weekend, but attendance numbers were reported to be in the 69K range for the final events on Sunday, after high 70s in 2009 and around 93K the initial year in 2008. There was a great show to be seen by all.