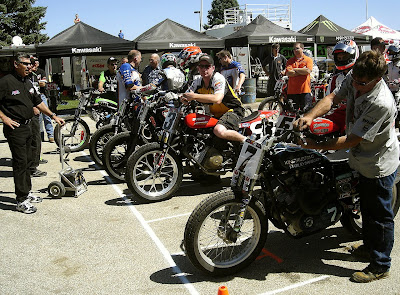 After a 13 year break, AMA Pro Flat Track returns to the Minnesota Mile horse track and all bets are off once the final events on the day are flagged off. With only three events left in the 2010 season, it's time to talk or shut the h..l up as the best riders in the world, racing in the best motorcycle racing series in the world, go WFO on the mile track today.

Catch all the action here today as The Rolling Thunder Show kicks off with practice at 2:30 EDT today leading up to the run for the championship in the greatest show on wheels.

The local ABC affiliate in Minneapolis, Eyewitness News Channel 5, had reporters on hand yesterday as Henry Wiles on his #17 Atkins Bros/KK Motorcycle Supply/Don Kissinger Racing-backed XR, along with Minnesota's own Mataya Brothers, ran a few demo laps for the sports report as filed and shown on their local network. Great job in getting the local news to make mention of this great event. Check it out here: