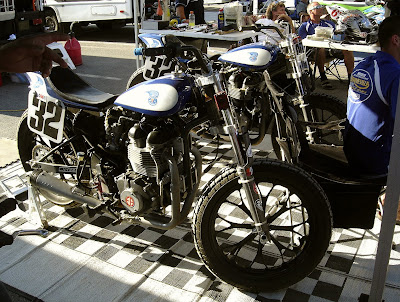 A big thanks to Brett Noble who runs the super site TriumphFlatTrack.com for posting some of my shots from the Lucas Oil Indy Mile round 12 of the AMA Pro Flat Track K&N Filters presented by Motorcycle Superstore.com Series. Brett runs the best site on the net for Triumph fans that is a fine mix of the old and the new from the British marque featuring race and street tracker coverage that is second to none.

Shawn Baer and the Bonneville Performance Triumph team will also be running the Springfield Mile on Sunday and looking to put it into their fourth Twins event of the season. We wish them the best of luck and we will be on hand to take some more shots of this up and coming team!

And here is a race report from the Bonneville Performance Triumph team also posted over at TriumphFlatTrack.com:

And last but definitely not least, thanks go to Brett Noble again at TriumphFlatTrack.com for posting a few of my shots and link to my story about Shawn's Indy semi win as well as my race report for the Lucas Oil Indy Mile. Thanks again and hats and helmets off to Brett for not only posting some of my shots but for maintaining a very fine site:

Here is Bonneville Performance's official site on the web. If you need or are interested in fixing up a new or old Triumph, these are the guys to go to. Check them out here: