Own a Piece of Nicky Hayden, AMA Flat Track and Indy Mile History 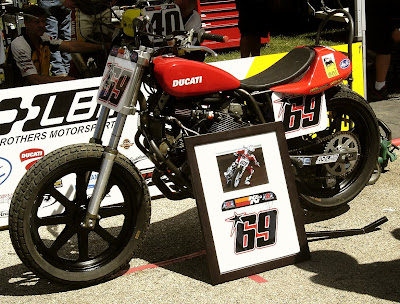 Lloyd Brothers Motorsports, who have put together one heck of an AMA Pro Flat Track race team with the use of the Ducati Hypermotard 1098-based machine as their weapon of choice for the 2010 AMA Flat Track Grand National Championship Series, displays the #69 Lloyd Bros/American Agip/Motion Pro/VMC Racing Frames GNC bike that they set up for Nicky Hayden to ride some demo laps at the Indy Mile on Saturday, August 28th. The bike was on display in the pit area at the Springfield Mile last Sunday, and earlier in the day was sitting behind their pits before they rolled it out for the pitwalk between qualifying and the race action for the day. People were swarming all around it, as it was quite a nice attraction to see that obviously has some neat history behind it.
I heard a couple of versions of how Nicky actually did in terms of times put in on the three laps he did on this at Indy. Supposedly, as timed by hand by one of the top tuners in the business, he cut a 39.2 and someone else had him at a 39.4. Originally said to be good enough that Nicky WOULD have qualified 8th or 9th on the night. But compared to qualifying times--fast time put in by eventual-winner Bryan Smith on the #42 Werner/Springsteen Monster Energy Kawasaki at 37.767 around the one mile oval--Nicky's time would have put him between 20th and 24th depending whether it was a true .2 or .4. Either way, not bad for a guy who hadn't ridden a true flat tracker on a true flat track since 2002.
The plaque as displayed next to the bike last Sunday has been put on eBay, and as of this writing had over 7 days to go in bidding time. Lloyd Brothers Motorsports and Larry Pegram Racing are putting this up and all of the proceeds go to the AirFence Fund for rider safety. A VERY worthy donation that I am sure will help out immensely with maintaining the airfences used in the AMA Pro Flat Track K&N Filters presented by Motorcycle Superstore.com Grand National Championship Series.
-------------------------------------------------------------------------------------------------

Check out the listing on eBay that Lloyd Brothers Motorsports and Larry Pegram Racing have put together to help out the AMA Flat Track AirFence Fund. A very worthy cause and a neat piece of AMA Flat Track, Nicky Hayden and Indy Mile history, they took one of the great photos taken of Nicky on his three lap demo on the mile oval, added in the number plate they bolted on to one of Joe Kopp's back up machines, got the '02 AMA Superbike and '06 MotoGP World Champion to sign it, and then mounted it on a neat plaque and encased it in a very nice frame. And, the proceeds go to the AirFence Fund to maintain the safety barriers used at the tracks by the AMA Flat Track Series. Sweeeeeeeeeeeet!

This is the link to the eBay.com listing of this great plaque that Pegram Racing and The Lloyd Brothers put together for the Airfence Fund. There's still over 7 days (as of Friday 9/10/10 1315 EDT) to get in on this great piece of AMA Flat Track and Nicky Hayden history. And as you can tell from the shot of it sitting next to the bike last Sunday at Springfield it's a real sweet collectible piece.

There's also a couple of shots of Nicky, one on track, and one with him posing with the number plate as was mounted on this plaque on the listing site.

Go here to bid and check it out:

Here's the link from YouTube.com of Nicky tearing it up at Indy. It's a fan video so have some patience, but it's worth it just re-living him talking about the ride, and more important that he would be back some day:

Lloyd Brothers Motorsports official site on the web can be found below.

Check them out, they have put together one heck of a team and machine for 2000 AMA Flat Track Grand National Champion Joe Kopp to campaign this season, and in putting this plaque together along with Larry Pegram Racing are doing a really neat thing in auctioning this off for the AirFence Fund. Bravo!

And here is Larry Pegram Racing's official site as well. Larry put on a great ride at Indy that night as well in winning his semi to transfer to the main at the Lucas Oil Indy Mile, and bringing it home in the 12th spot: