Throttle Problem Cause of Dani Pedrosa Crash at Motegi MotoGP: Expected To Miss At Least Next 2 Races With Broken Collarbone 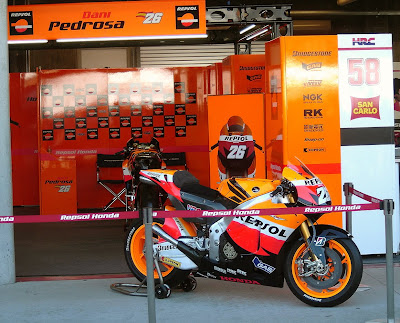 Just a few minutes into today's first free practice session at the Twin Ring Motegi round of the MotoGP weekend, Repsol Honda's Dani Pedrosa fell hard due to a throttle glitch and was pitched into the tarmac breaking his collarbone in three places. This pretty much knocks the Honda rider out of any chance of catching title leader Jorge Lorenzo, as Pedrosa is expected to miss at least this round as well as next week's round in Malaysia.

Pedrosa had been a distant 56 points in arrears of Lorenzo heading into this weekend's meet in Japan, and catching Lorenzo in the championship was probably at best wishful thinking. And with only five rounds left in the season (including Motegi) the chances are pretty good Jorge will be crowned the 2010 MotoGP World Champion before season's end barring any problems on his end, of course. Pedrosa was having the best year of his MotoGP career and had won four races and garnered five seconds since the season kicked off in Qatar in the early spring. The MotoGP season wraps up in Valencia on November 7th.


Henny Ray Abrams was on-hand at Motegi and posted this article-with an 'on impact' shot-of Dani hitting the deck some five minutes into the 60 minute timed free practice session one:

David Emmett of the most excellent MotoMatters.com talks about Dani returning home to Spain to have surgery performed to have his collarbone plated:

http://motomatters.com/news/2010/10/01/pedrosa_returns_to_spain_for_surgery_out.html
And more from David on the fly-by-wire throttle sticking and causing Pedrosa to crash today in the first practice session at Motegi: