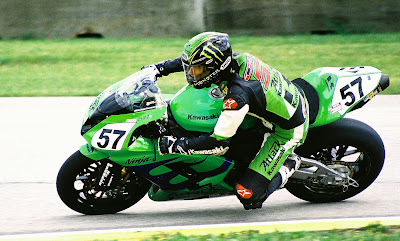 With the series main protagonists running the 'more preferred' 600 inline four cylinder platform in the highly competitive series, Team ParkinGO Triumph took on the task of fielding four riders on the British marque with it's mid-size and very popular three cylinder 675CC machines. After having spent time in Europe racing various other series over the years, and being British himself, Chaz filled the bill that the team needed to stay and race up at the front in one of the world's most competitive series, and to be able to regularly bring his equipment home.
Out of 13 rounds on the season, there was only one round he failed to finish-last weekend's round in Imola. Since the third round in Valencia in early April, Chaz was able to stay in the hunt for the season and held the fourth spot firm in the championship standings throughout the rest of the year. Talk about consistency! All the while, the top three in the championship were all inline-4 mounted.

http://motomatters.com/results/2010/10/03/2010_magny_cours_world_supersport_race_1.html
Superbike News in the UK posted this story of the day's racing at Magny Cours for the final event of the 2010 World Superbike and World Supersport Championships: