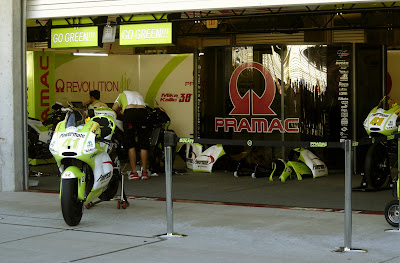 According to the chatter at Yahoo EuroSport, that rider is Carlos Checa, who just wrapped up his year in the World Superbike Championship Seris less than two weeks ago. Checa may be best known to U.S. fans for taking the Ten Kate Hanspree Honda CBR to the double win at Miller Motorsports Park in Utah in WSBK competition in 2008. Not to mention his many years riding in the top-tier series globally.

From Yahoo Eurosport, Carlos Checa to ride for Pramac Racing in remaining rounds of the MotoGP season: