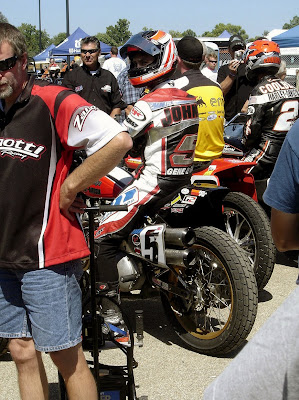 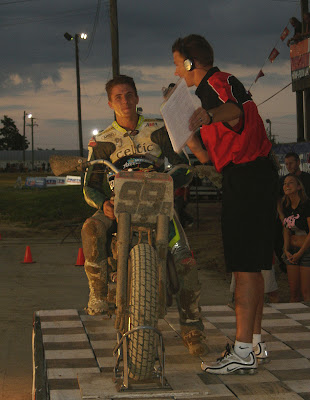 To the winner go the spoils, so they say, and the season ending awards banquet for the 2010 AMA Flat Track Grand National Championship Series awarded the official #1 plate to Jake Johnson and the Zanotti Racing team in Prescott Valley on October 10. Although the big money isn't and hasn't been a part of the scene in AMA Flat Track for some time, unfortunately, there was still season-ending cash to be paid out to the winners and entrants of the 2010 AMA Pro Flat Track K&N Filters presented by Motorcycle Superstore.com Grand National Championship Series thanks to the title sponsors, K&N Filters, having come on board with the series at the end of May. With a points pay-out for the top ten in the overall point standings, cash and trophies were the norm for the day in Arizona.

And P.J. Jacobsen, who until this year had been spending most of his time road racing, attempted to qualify for six main events this year, making four of those, and finishing 18th in the season overall point standings with 44 points to garner the Rookie of the Year Award for the 2010 AMA Pro Flat Track season. We can only hope this young man wants to keep running in the series for 2011 and beyond, as he put on some good shows on the track this year on his Moroney's FAST HOG-sponsored XR to keep the fans on their feet. Whatever he may end up doing he has a very long and bright future ahead of him at the young age of 17. We hope to see him back next year for some flat track events. Great job this year, P.J.!

AMA has the story here on the AMA Flat Track Awards Banquet held in Prescott Valley after the season ending round at Yavapai Downs. Good shot attached also of Jake and the Zanotti Racing team accepting the ceremonial #1 plate for the 2010 season:

This is the same release from the AMA as put up over at MotorcyclistOnline.com, but this one has a few other pics of the awards ceremony that are worth the look:

Today's Cycle Coverage.com had Dan Jacobson, Sr. on the scene in Prescott Valley and he filed this report on the season ending race along with some great pics thrown in from The Fast and Dirty's Yve Assad. Great stuff here:

Tyler Porter filed this great interview with 2010 AMA Flat Track Grand National Champion Jake Johnson on his Fight for Dirt Track site. Definitely worth the read. Thanks to Tyler and Congrats again to Jake Johnson:

Here is Zanotti Racing's official website where you can read up on a little bit of history involving the first father and son-run team to win the AMA Grand National Championship, 31 years apart:

Weiss Racing is one of P.J.'s long-time sponsors:

And Moroney's Fast Hog H-D was who helped put together the XR750's that P.J. rode this year:

Steve Warne's Poppa Wheelie site has some great shots of P.J. at the Yavapai Downs Mile season ending race on October 9. You can check out Poppa's great stuff here: