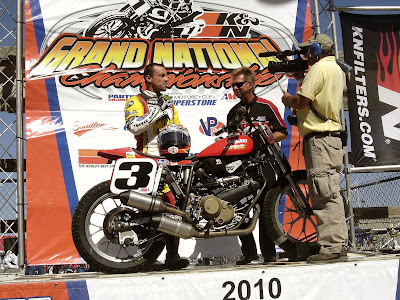 Leading the 2010 AMA Pro Flat Track K&N Filters presented by Motorcycle Superstore.com Grand National Championship overall point standings for the better part of the year, the wheels on his championship season slowly started to fall off of his and the Lloyd Brothers team efforts as the series was just hitting the stretch run. With multiple errors that plagued the overall great year the team had, the final straw was not only losing the chain in Minnesota, but the rain-out at Knoxville. With just one season-ending event to decide the overall championship, the Lloyd Brothers Ducati rider found himself in a position that was too much to come back from. And not to take anything away from 2010 AMA Flat Track Grand National Champion Jake Johnson and the Zanotti Racing team, either, which seemed to be running strong on all cylinders all season long.

Most of you know Larry Lawrence as the guy who had covered AMA Flat Track racing for the now defunct, hardcopy version of Cycle News for the last few years. As well as the great 'Archives' column that featured great looks back in motorcycle racing history which he had penned for them for the last 4-5 years as well, and also his super site The Rider Files.com that debuted in June of 2009. Larry got in touch with Joe Kopp in the last few days to talk with the 2000 Champ and get his views on hanging up the steel shoe and what the future holds for him. Being a great family man, one of Joe's main topics of discussion were his family. And he also states that although the full-time racing is over with for him, he does still plan to run some select races in the future, as well as wanting to get involved with racing or the motorcycle industry in one form or another.

Here is the link to Larry's interview with Joe which is a must-read and a very cool listen! Kick back for about 20 minutes and listen to what Smokin Joe has to say about the year, why he chose the #3, and what the future holds for him and his family: