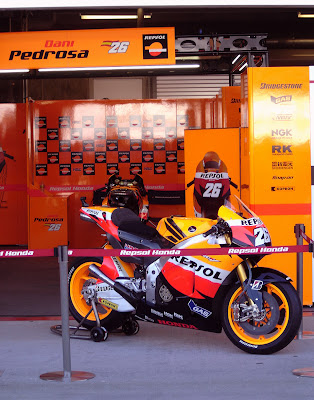 Dani Pedrosa's #26 Repsol Honda RC212V sits outside his garage (with another in the stall just behind readied for battle) in the paddock area at the Red Bull Indianapolis MotoGP in August of 2010, the 11th stop on the 18 round 2010 MotoGP World Championship season. Just a little over 48 hours later Pedrosa would take the top-speed king in the MotoGP series to the win over American Ben Spies, who had started the day on the pole. Pedrosa would severely break his collarbone several rounds later, and any chance of catching Jorge Lorenzo for the 2010 title was lost. He is expected back for the final two rounds in Portugal at the end of October and the season finale in Valencia the first weekend in November, and at least still has a fairly clear shot at 2nd place in the championship.
Pedrosa will again be teamed with Andrea Dovizioso in 2011, and will also have new teamster and '07 MotoGP World Champion Casey Stoner on board under the Repsol Honda factory 'tent.' Repsol was said to up the ante with HRC by $5MIL U.S. (to a total of $15MIL U.S.) in order to make it a three rider team run out of one main garage, albeit working individually like is standard in the top level series. But to see them kick in the extra dough to help this effort along (as well as help to guarantee at least ONE more bike on the grid that should be running in the 800 top-flight class at the front) is a great sign of better things to come in MotoGP in the series' 800-era swan song. Also with Repsol having been a long-time sponsor in the series since the Mick Doohan days is great to see them stay on board, especially in light of the world economy still flat-lining as it is.
-------------------------------------------------------------------------------------------------

In a good sign of all things economy-related, Spanish oil giant Repsol is said to be kicking in another $5 Million to help run the 3-rider Honda Factory effort in the MotoGP World Championship for the 2011 season. Repsol has pretty much been synonymous with the HRC factory effort in the MotoGP/500CC World Championship since the early '90s and the Mick Doohan championship stranglehold years, having taken over title sponsorship for Honda's efforts after Rothman's went away from the top-level road racing series in the world.

It has been confirmed by David Emmett, from his always-on-the-scene MotoMatters.com that Repsol will indeed up the ante to the factory Honda squad, which currently consists of Dani Pedrosa #26 and Andrea Dovizioso #4 on the RC212Vs, to make accomodations for new team mate and '07 MotoGP World Champion Casey Stoner. This is great news since earlier in the season when it was confirmed Stoner was moving to the Honda squad, there were a lot of unanswered questions as to which rider would run out of what garage for the 2011 season.

You can read David's report on the good news for all-things MotoGP right here: