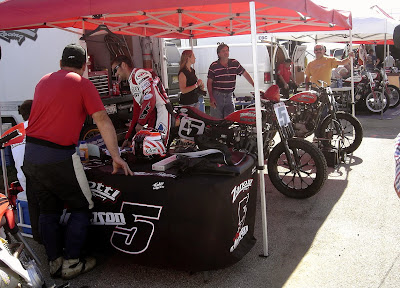 Jake had a great day in winning his heat and coming home 5th in the dash to add to his overall point total going into the day. His final points lead over runners-up Mees and Joe Kopp was 289-269 as the two ended tied in points in the year, with Kopp taking the tie breaker via his three wins this year. Mees had a very consistent year in ending up third in the standings without a win in the 2010 season.

The 2010 AMA Pro Flat Track K&N Filters presented by Motorcycle Superstore.com Grand National Championship Series season saw Jersey Jake take three wins for the season including his second round win on the Daytona Short Track, as well as his win on the Springfield Mile in May. This is the first year since the 2005 season that AMA Flat Track will recognize the overall champion in the sport, whereas since the '06 season points and championships have been rewarded in both the Twins and Singles classes. Although each class will be recognized for the year, the overall champion, Jake Johnson and the Zanotti Racing Crew, will wear the coveted #1 plate in the 2011 season.