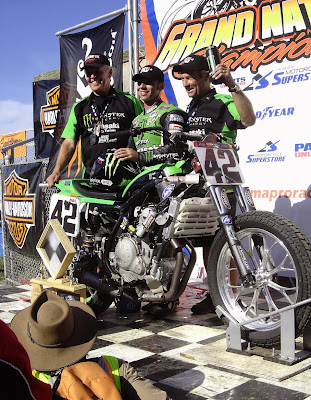 With the season now over for the 2010 AMA Pro Flat Track K&N Filters presented by Motorcycle Superstore.com Grand National Championship season, we take a look back on the winning team and their historic wins and taking Kawasaki to the winners circle for the very first time in the AMA Flat Track Grand National Championship Twins Series. And we now look to the future of what could be with The Super Team of AMA Flat Track Series Racing. With team helmer Werner talking about possibly fulfilling whatever demand there may be for more of these bikes in the series for the off season, AMA Flat Track Racing could be taking on a completely different look not too far down the road. And 2010 sure did a good job of altering that look!

Here's some nice PR from AMA Pro Flat Track's title sponsor K&N Filters on the team's win at the Lucas Oil Indy Mile and the Springfield Mile. This also has some nice shots from Yve Assad of The Fast and Dirty.com.
Master Wrench Bill Werner mentions that he plans to work towards trying to satisfy any demand that may come about for other team's wanting to put together one of the Kawasaki 650R's for competition use in the AMA Flat Track Series over the off season:

This is an older press release from K&N Filters that came out in late 2009, but it talks with Bill Werner about how and why he started off on the big project of a putting together the Werner Springsteen Monster Energy Kawasaki team along with Jay Springsteen and winning rider Bryan Smith: