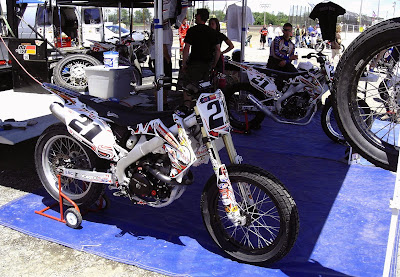 The Jammer may be sitting in the third spot in the AMA Flat Track Grand National Championship overall point standings by virtue of his great equipment and his extremely consistent runs this season, but at Bakersfield he flat spanked the field in winning his heat-the night's fastest, winning the dash for cash event, and topping it off with a win in the main of the Digger Helm National while riding a Honda put together by Ed Steffen, one of his long-time supporters. Great job by Jared and team to pull this off and to take home a little more bacon in the process. Congrats man!

Here's The Champ's official spot on the web:

Jared put out a press release on his great win at Bakersfield from last weekend. Larry Lawrence's fine site TheRiderFiles.com had this up this morning from The Jammer that also includes a shot of the race action from the Digger Helm Short Track National in Bakersfield:

Mark Cernicky posted this report with some pics of the race weekend at Bakersfield over at the Cycle World Blog: