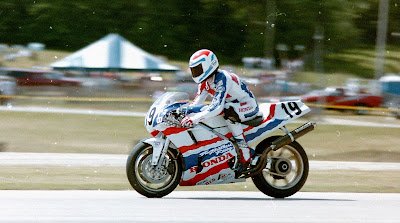 One of the true nice guys-at least to this writer and fan-he has reportedly fallen on some hard times over the last 12-18 months. Hopefully he will find his way again, and back into the motorcycle racing scene in one way, shape, form or another. His knowledge of the track, the machines and the criteria to compete are top notch and would be welcomed by anyone in the road racing scene that had a clue, or at least wanted to get pointed in the right direction to FIND a clue!

Here is the article from F and F that also has some great pics of Fast Freddie riding his 1985 championship winning bike at the Goodwood Festival of Speed from a few years ago. Check it out and drool:

And Dean Adams over at his great site SuperBikePlanet.com dug out this article from four years ago about Spencer winning the '83 500 title at the age of 21 and talking about his roots and his will to race: