Gary Scott #1 works the cushion outside while Mike Kidd #72 runs it low coming out of turn four at Louisville in the fall of 1976 during heat race action for the ABC Race of Champions year end finale. Bringing up the rear is the late Steve Eklund on the #74Z. All are Harley-Davidson XR750 mounted, back when the XR had taken hold and got a grip on being the winningest machine in AMA Flat Track Grand National Championship racing.
These three men all share a couple of major traits among themselves--besides being some of the best former greats of our sport. They all won the AMA Grand National Championship in the days when flat track and road racing were combined, and for the most part they all did it based solely on their results on the dirt. Of course in those days, there were only a handful of road races on the calendar, but nonetheless when your competition is comprised of people like Kenny Roberts, Skip Askland and the late Randy Cleek you needed to score in all disciplines in order to be in contention for the big #1 plate and trophy. If my memory is correct, only Scott scored any useful points in some select events on road race equipment. They are also enshrined in the AMA Hall of Fame, and were also members of the inaugural AMA Flat Track Hall of Fame that was set up by Dave Despain at the Springfield Mile in late summer of 1998.
Gary won his AMA Grand National Championship in 1975 riding for the Harley factory and with Master Tuner Bill Werner turning the wrenches for the #1 plate. After falling out with H-D and dirt track manager Dick O'Brien, he went on to form his own team using XRs, Yamaha two and four stroke singles for his short track and TT program, and then Triumph 650-based TT machines that absolutely ruled the TT tracks for several years straight. And an occasional ride on a Yamaha TZ750 road racer thrown into the mix. Oh, and he won the '72 Rookie of Year title beating out Kenny Roberts and Mike Kidd in the process, a pretty deep rookie class.
Eklund, who would win the '76 AMA Rookie of Year in AMA Flat Track, would go on to win the '79 AMA Grand National Championship with the Zanotti Racing team (Mario, the father put it all together with Eklund in '79 and Dave, the son is the man with the plan this year for #5 Jake Johnson, and the current points leader going into the final round in Arizona this Saturday.) He was also the first privateer to win the GNC since Dick Mann had won his first of two GNCs in 1963. Unfortunately, Steve was seriously injured at the Albuquerque Mile in June of '90 and succumbed to his injuries some 15 months later.
And then there is the current AMA Flat Track Manager, the '81 AMA Grand National Champion, and one of the men in this sport that has raced for several former factory teams back in the day when factory involvement in AMA Flat Track was a must for the major manufacturers. That man is Mike Kidd, who is the man that was the first notable racer to bring major outside the industry sponsorship to the table in AMA Flat Track Grand National Championship competition. Of course, Gene Romero and Gary Scott at one time or another in the mid-late '70s had been sponsored by Evel Knievel, but Mike Kidd brought the U.S. Army to the program in the late '70s, opening a door for sports-related sponsorship for a branch of the U.S. Military that still exists today with big money in NasCrash and NHRA. Kidd also rode for Triumph, H-D and Honda throughout his career and was part of the original program with Team Honda in the early '80s before hanging up his steel shoe at the end of the '83 season. He now mantles the helm of the AMA Pro Flat Track team and has helped turn the sport around in terms of popularity, action and timeliness and helping to promote AMA Flat Track and the entertainment value of the sport to the paying customers. 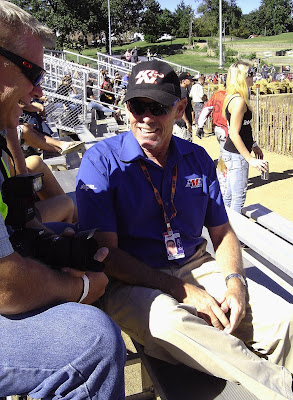 AMA Flat Track Manager Mike Kidd takes a break during a break in the practice sessions at the AMA Pro Flat Track K&N Filters presented by Motorcycle Superstore.com Grand National Championship round at the Springfield Short Track on Saturday, September 4, 2010. Here MK is seen talking with The Rider Files.com's one and only Larry Lawrence, and another man who has helped to bring AMA Flat Track to the masses when he was covering the scene for the now-defunct print version of Cycle News. Larry was kind enough to let me tag along to some races this year and not only was it a blast hanging with the Sultan of Shots but getting back to more of the AMA Flat Track scene was the best thing that has happened to me in years. I had a blast and can't wait for the 2011 season of The Rolling Thunder Show.
Mike has helped put together a team consisting of Master Track Prep and former AMA Flat Track Grand National Championship competitor, Steve Morehead, Dave and Kathy Hoenig, Scotty Duebler, Rick Dorfmeyer and numerous others who work in the front and back lines at every AMA Flat Track event and make things happen at these super events. The AMA Pro Flat Track Team has worked together to not only speed up the program, milk the entertainment value of the sport, and put on a show that is like NO other in any type of two OR four wheel racing. Bar none! 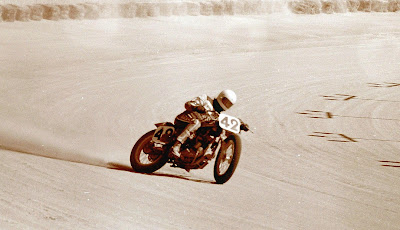 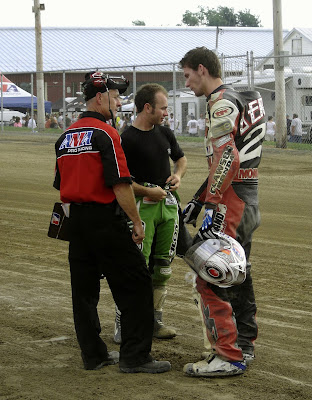 Mike Kidd's page at the AMA Hall of Fame:
http://www.motorcyclemuseum.org/halloffame/detail.aspx?RacerID=100&lpos=0px&letter=K&txtFname=&rblFname=S&txtLname=&rblLname=S&discipline=0