Something For All The Honda VFR750R/RC30 Fans: AMA Superbike Retro & Hat's Off to RC30 in Canada 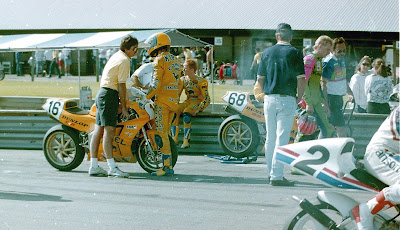 The Honda VFR750R/RC30 was well represented on U.S. shores by Martin Adams' Commonwealth and Camel Honda teams, as well as the Erion brothers with their Two Brothers Racing team in the AMA Superbike Series. It is well-known that '95 AMA Superbike Champion Miguel Duhamel won his and Commonwealth/Camel's first Daytona 200 as a 'fill-in' on the Camel team for injured rider, the late Randy Renfrow. Probably one of Two Brothers/Spencer's most memorable wins to some AMA Superbike fans was the Miami street race, which was televised on CBS Sports back in the day. Spencer won out in the debacle that was, and usually is street racing in the United States.

Rick has put together a great site that pretty much covers it all on the V4/RC30 World Championship-winning machine. And he has been kind enough to post a few of my shots on his site as well. You can check it out here, but you better bring a towel to wipe off all that drool that is about to start flowing from your mouth:

Thanks to Rick at RC30 up north for posting some of my shots! You can check those out here along with some other very cool pics of RC30's in action and up close: